Ok!  I have been promising this for a very long time indeed.  Better late than never, right?

As you’ve probably noticed if you’ve been reading this blog for long, one of my favorite things to do (like, ever) is watch Doctor Who episodes with podcast commentary.  Sadly, I’ve been slacking at that lately.  I simply haven’t had the time.  (Ironically, I’ve spent a good deal of that time talking to Doctor Who podcasters on twitter–so guys, you really only have yourselves to blame.)

So what I’ve been doing is listening to the commentary episodes, right up until the time the commentary itself starts.  Then I note the time and switch it off.  That way I can come back later when I have the Who story (and my knitting) at hand.  The waiting is actually helpful in some cases–for example when a podcast does commentaries on an entire season.  You see, I listen to podcast back-catalogs in reverse order.  I like to start at the present and work my way back.  It’s fun!  But watching a season of Doctor Who in reverse order is less fun.

To avoid getting terribly confused when it does come time to catch up on commentaries, I’ve done one of my other favorite things: created a spreadsheet!  This way I can keep track of the Doctor Who stories, the podcast episode numbers, and the time in the podcast when the commentary gets rolling*.

Several people asked if I’d be willing to share this spreadsheet, and (of course) I am!  It’s sorted by podcast, then organized in the (rough) order in which I plan to watch them, so I apologise if it seems a bit confusing.  Also, the last column has notes that mean nothing to anyone but me.  Feel free to download it and change it around as you like (assuming you’re as big a nerd as I and would actually want to do such a thing).  I’m constantly adding to it, so I’ll probably post updates occasionally if it seems like anyone would be interested.  Frankly I’m shocked that anyone was interested in the first place.

Incidentally, if you’d like a bit more information about the podcasts that are referred to in the spreadsheet, I encourage you to check out my previous entry here, Podcastastic.  I do a quick rundown of what I’ve been listening to lately.

So anyway, here is the spreadsheet: use it in good health (click to download the excel file): Podcast Commentaries

*Note that the time listed is the moment at which Steven from Radio Free Skaro says the words “legally purchased DVD” (or whatever the analog of that is on the other podcasts–Josh sometimes remembers to do that on DW:MHC as well).

Ok, so I haven’t posted anything lately.  That’s because I also haven’t knitted or watched much Doctor Who lately.  However, what I have done is listen to oodles of episodes of Doctor Who-related podcasts.  (I’ve mentioned before that I listen to several.)  Well that’s what I’ve been up to.  You know how when you (and by “you,” I mean “crazy people like me”) discover something new, well new-to-you (again, meaning me) that’s really really super awesome, and you (me) just throw yourself (myself) into it headlong?  That’s pretty much what happened to me and the apparently-very-wide world of Doctor Who podcasts.  Don’t get me wrong, I only listen to a teeny-tiny, itty-bitty fraction of what’s out there.  I’m sure there are heaps and buckets of other awesome podcasts I haven’t gotten around to yet (and probably never will–there are only so many hours in the day after all).

So if you know of (or create) any I haven’t covered here, feel free to mention them in the comments, or tweet me about them.  I might even get around to listening someday, but no promises.  There’s only one of me!  (And while it might be swell having multiples of me for podcast-listening purposes, trust me, the world is really better off with only one E.)

So here is my very quick* rundown on the Doctor Who podcasts I’ve been listening to (listed in the order I discovered them):

I heartily recommend each and every one of these podcasts.  It really felt like a whole new world opened up to me when I discovered they existed.  I feel like I should also give an honorable mention and a quick shout-out.  Honorable mention to The Platformer Podcast.  It has nothing (well, very little) to do with Doctor Who, but two of the three lovely co-hosts were mentioned above.  I never thought I’d enjoy a technology-based podcast, but I find myself looking forward to this one every week!  The shout-out goes to Kyle Anderson, writer for (among other things) Nerdist.com.  First of all, if it wasn’t for Kyle, I’d have never discovered any of these podcasts, so I’m pretty much forever in his debt.  Secondly, Kyle himself has become one of my favorite podcast guests.  The guy knows his stuff, and more importantly, knows how to talk about it in an entertaining manner.  (And as of recently, he’s co-hosting a podcast of his own.  If you enjoy bad movies, or people talking about them, you may find that the WTF Are You Watching?! Podcast is relevant to your interests.)

Ok.  So when I sat down to write this, it was supposed to be about a certain spreadsheet I’ve mentioned on twitter, but as it seems to have turned into something else entirely–something huge, apparently, I think the spreadsheet post will have to wait until later.  Stay tuned!  (How’s that for a teaser?***)

*It may not look “very quick,” but trust me, I could go on and on (and on) about each of these.

**I’m told Gallifrey One is the world’s premiere Doctor Who convention.  I’ll get to find out in February, as I’ll be attending for the first time.  So exciting!  I will probably be starstruck meeting all these podcasters in person.

Last week was a special week in Doctor Who for me.  As I mentioned, I recently acquired a number of episodes on VHS.  No, before you ask, I didn’t pay for them–unless the effort of lugging them from my parents’ house to mine counts.  (And it shouldn’t ‘cause my dad carried them out to my car, and my houseguest carried them in to my apartment.)  So as you’ve probably surmised, I snatched these from my parents—from my mom, specifically.  She’s been trying to clean out the house and get rid of stuff.  When she asked if she should toss them, I said no way!

My original plan was to take them, sort through them, and ditch all the episodes that are easily accessible via Netflix (either streaming or on DVD).  And that’s still my plan…really…uh huh…  No, seriously, it is.  I just wasn’t prepared for the emotional reaction I’d have to holding those tapes again.  My houseguest, C, was laughing at the squeaky sounds I was making at being reunited with my “old friends,” as he called them.

They really are old friends.  The number of hours I spent watching (and labeling—Mom was rubbish at labeling promptly) those clunky things is beyond measure.  They literally got me through one of the worst summers of my life.  And then my brother came along and wanted to watch them too, so I started right back over at the beginning with him.

So anyway, it looks like they’ll be staying for a little while at least.  I’m simply not ready to part with them just yet.  And they don’t look half bad all stacked up along the wall next to the TV.  It’s like (retro) modern art.  (Or so I’ll keep telling myself.) 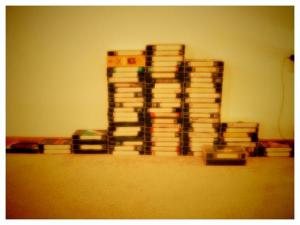 They’re sorted by Doctor (1-8).  It’s pretty clear which eras my mom favored.  There are very few repeats in there.  I haven’t looked through them thoroughly yet, but I think there may be three different copies of the Trial of a Time Lord season, so picture the Colin Baker stack a good deal shorter.  Also, please note that almost all of these were recorded on EP, which means there’s about 6 hours of Doctor Who on each tape.

So this should give you an inkling of what it was like to grow up in my household.  Doctor Who took precedence over just about everything else.  In fact, there was one time in particular when Dad had a friend visiting, and the Green Bay Packers were playing some important game at the same time Doctor Who was on.  Catastrophe!  That particular problem was solved by Mom renting a motel room for that Sunday, taking the VCR, and taping it there.

Come to think of it, that wasn’t the only time Mom went to a motel in pursuit of Doctor Who.  One weekend the Madison PBS station was having a Doctor Who marathon.  Problem: we lived near Milwaukee, so we couldn’t get the channel.  Solution: Mom got a motel room halfway between Milwaukee and Madison, took the VCR, and spent the entire weekend taping Doctor Who.  It’s worth pointing out that we were not exactly well-off, and renting motel rooms (and even shelling out for VHS tapes) were not insignificant expenses for us.  But for the good Doctor, ‘twas all worth it.

One thing I meant to do and forgot was to go through Mom’s box o’ memorabilia.  I think she got rid of some stuff over the years, but I know she still has a bunch of items from the various cons she attended back in the day.  She’s got autographs from most of the actors who’d played the Doctor by that time, old fanzines, bookmarks, lots of neat stuff I only half-remember because I wasn’t allowed to look at it unless she was there to make sure I didn’t ruin anything.  Maybe next time I’ll remember to delve into that treasure trove of memories.

Until then, I’m well-fixed with my precious precious videotapes.  Scoff if you want, but right now, the cockles of my heart are about as toasty as they get.