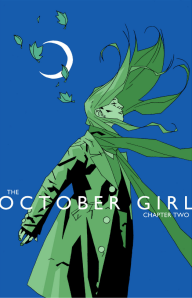 You know how when something starts out really strong, you get worried that the second installment isn’t going to live up to the bang-boom-pow opening?  No worries here.  Matthew Dow Smith keeps the awesome flowing in the second installment of October Girl.  That same hair’s-breadth-shy-of-brooding atmosphere is just as present as it was in issue #1, and I must admit, it’s got me looking forward to the fall.  I love when the air outside reflects what I’m reading*.

I am now picturing myself sitting in a gazebo in the chill fall air, phone tablet** in hand, re-reading all the existing issues (however many there are by that time) and enjoying the frissoney realization I could easily be in the middle of the story rather than outside it***.  This is the kind of story that sucks me in in exactly that way.

–Which is only one of the reasons I can’t wait for more.  The others include the unfolding story itself.  I’ve yammered on about the mood and haven’t even mentioned how captivating the plot is.  As with issue 1, I simply can’t wait for the next installment.  The cliffhangers in this thing are intense.  We’re talking Sarah Jane falling at the end of “Genesis of the Daleks” Part Two here****.  It remains to be seen whether the next bit is as cop-outtey as in Genesis.  I, for one, have great confidence that it’ll deliver on its promise.

Another thing I’m unaccountably enjoying is the artwork.  I tend to gravitate to the text in comics and barely scan the art, but the two work together so well in this case that I find myself consuming each with the same fervor.  Perhaps that’s what happens when they both emerge from the same fascinating brain.  Whatever the reason, I want more of it!

I can’t recommend strongly enough that you check this series out.  It’s only 99 cents an issue—cheap at twice the price!

* For the record, I also love it when the weather outside is the complete opposite of what I’m reading.  Monument by Lloyd Biggle Jr. is one of my favorite books to read in the winter—in a hot bath.  It’s one of my favorite things about winter actually.  I think re-reading October Girl in the fall might become a thing too.

**Why not?  I don’t have a tablet, but this is my fantasy, so I’m picturing it that way.

*** Or perhaps just on the periphery, but still in its world.  Even that would be a lovely escape.

****As opposed to a close-up of a floor tile in “Death to the Daleks” Part Three.