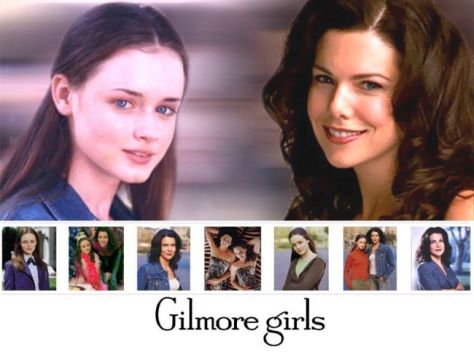 As you may have heard, the entire run of Gilmore Girls is now available on Netflix!* I don’t mind telling you, I was more than a little excited about this. It’s been All Sports All The Time lately in our house, and while I do like a good hockey game (even if they are just exhibition games right now), I’m kinda ready for baseball season to be done. Or I was anyway. Now I wouldn’t really mind if it went on and on, and here’s why:

Yep. That’s right. We’ve got two TVs in our living room, and as both have had baseball on them for weeks on end, one of ‘em is now mine! (insert diabolical laugh here) Yep. I’m starting from the very beginning and making my way through the whole series. Last night was episode one of season one, which you might recognize from the picture if you’re a crazy-hardcore fan. I would not call myself a crazy hardcore fan. I do really like the show, and I’ve seen every episode at least once—mostly only once though. This will be my first full rewatch.

I actually came to Gilmore Girls a bit late. It’s another in a long list of many things things my sister discovered first and I sort of ignored.** Eventually, I caught enough bits of episodes that it sunk in: this show was (and still is) for me. Its cast is heavily female—not only the leads, but much of the supporting cast. It’s smart—both leads are well-read, articulate characters. It’s snappy—the dialogue is fast-paced, sprinkled liberally with pop-culture references, and often laugh-out-loud funny. It’s gripping—I care about these characters. Yes, I’ve seen the whole thing, but that notwithstanding, even after just watching the first episode, I’ve bought in. I want to know more. It’s a really excellent first episode in that respect.

If you’ve never seen Gilmore Girls,*** it’s the story of young single mother Lorelai Gilmore and her daughter…Lorelai Gilmore. That’s right. She named her daughter after herself—guys name their sons after themselves all the time, so why shouldn’t she? That, more than anything else in this episode, served to re-hook me and make me fall in love with Lorelai all over again. What a smashing little bit of characterization!

Another fall-in-love element is the fact that Lorelai and Rory (as Lorelai Jr. is called) are the best of friends. So often, mass-media depictions of the mother-daughter relationship focus on dysfunction. Even in shows that are largely comedy, the overbearing, judgey mother is a common punchline. I like that we get to see a healthy (though still imperfect enough to be realistic) relationship between Lorelai and Rory.

But fear not, drama lovers! This show (and even this ep) is not without the flip-side of that coin. Lorelai’s relationship with her own mother (and, indeed, father) is anything but comfortable, as we see before the episode is out. Whether Lorelai and Rory’s tight bond is a direct result of the broken one between Lorelai and her mother is a topic for Gilmore Girls scholars (and perhaps, the rest of the show’s run), so I won’t cover that here, but it’s an interesting subject.

As first episodes go, I think this is really solid. We get clear introductions to the main characters. By the time it’s over we know who they are, where they come from, and where they hope to go. (Not to mention one of my favorite TV theme songs of all time–thanks Carole King!) We get the introduction of a love interest (or two?), a couple of best friends, the extended family, and a handful of quirky side-characters that populate the small town of Stars Hollow (a place I’m not sure I’d want to live, but I’d certainly like to visit).

If you’ve ever been curious about Gilmore Girls, I absolutely recommend the first episode as a good place to start. I’m not going to promise everything continues exactly as it begins here (later they tone down some of the more slapstickey elements and provide much-needed development for some of the more two-dimensional folk), but it really does give you a flavor of the show, and it introduces the conceit that carries us through most of the series—in order for Rory to attend the fancy private school of her dreams, she and Lorelai must make a place in their lives for Lorelai’s nearly-estranged parents.

Yeah. We’re off to a really good start.

I don’t plan to blog about every episode I watch. I’m far too lazy for that, and I’ll probably be watching this daily. That said, I wouldn’t be surprised if this isn’t the last you see here about Stars Hollow.

..
*In the US, anyway. If you’re not in the US, and you have Netflix and want to watch, allow me to point you toward unblock-us.com.
**Take a note: if a librarian (or someone studying to be a librarian) tells you you’ll probably like something, you should listen. Right away. Don’t waste time. I am a walking cautionary tale.
***I kind of envy you. I wish I had it all to discover for the first time.