It’s been a while, but it’s time for another post about the fantastic folks I know and the terrific things they’re working on. Read on and marvel at the talent and ambition in my circles of friends!

Yes, I’m well aware Michael and Lynne M. Thomas were first on the list last time, but gosh darn it, they’re still being cool and doing an incredibly cool thing! You can read about them launching Uncanny in my previous CPDCT post. Well I’m here to tell you it’s been a rousing success! Lynne and Michael, along with managing editor Michi Trota, published some truly amazing stories and poetry as well as fascinating interviews and insightful essays about the sci-fi/fantasy community. I couldn’t be prouder to be a part of this effort.

That’s right, I’m helping! I co-produce the Uncanny Magazine Podcast. My co-producer is my talented spouse, Steven Schapansky. I really like working with Steven. We make a great team, and I think we put out a darn good podcast every month. But we don’t do it alone! Michael and Lynne are charming hosts and delightful to work with. I look forward to our on-Skype recording sessions every month. There’s always as much laughter as there is Serious Podcasting.

Plus we’re lucky enough to work with some incredibly skilled readers. Amal El-Mohtar and C.S.E. Cooney bring the stories and poems to life in a way that often makes me shiver. I love every episode, but the one that’s given me the most shivers so far is this one. Do check it out if you get a chance.

As if that isn’t enough, my fabulous Verity! cohost Deb brings us meaningful and substantial interviews with the authors. These are no fluffy puff-pieces! Though she manages to work in a good deal of fun and laughter as well. I always marvel at the amount of research she must do before each one. She asks The Best questions. And her podcast interviews are just the icing on the cake. She also puts together print interviews for the magazine itself!

Yeah, I could go on about how happy I am to be a part of the Space Unicorn Ranger Corps, but instead I’ll talk about one specific thing that’s happening RIGHT NOW!

That’s right! We’re having a subscription drive for Uncanny through Weightless Books! You’re always more than welcome to purchase an annual subscription, but if you do it by May 19th, you’ll get $2 off! It’s a bargain at full price, so I can’t recommend this enough. And there may be some cool giveaways of Space Unicorn swag at certain milestones. Who doesn’t want Space Unicorn swag? If you don’t, I don’t want to hear about it.

This one features another of my esteemed Verity! cohosts. Liz has been a busy beaver since my last post, so she has a plethora of cool things. 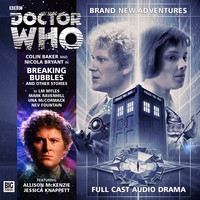 Liz, my Doctor Who-podcast cohost, has officially written for the Doctor! (Twice! As you’ll see…) Breaking Bubbles and Other Stories is an audio anthology from Big Finish. Liz contributed the title story. The Doctor and Peri have uttered words that she made up! I cannot get over how amazingly, utterly cool that is. I couldn’t be more excited for her.

Liz also stepped up and helped plan programming for a genre convention. I am awed at this. I have a small idea of the amount of work that goes into planning a convention, and let me tell you, it ain’t for the faint of heart. Nine Worlds Geekfest 2014 was, by all accounts, one of the best newer cons around. I’ve heard not one negative word about it, and I heard good things in particular about the Doctor Who track, which Liz herself pulled together! I only wish I could have made it across the pond to experience this for myself.

Cool Thing 3: The Scientific Secrets of Doctor Who 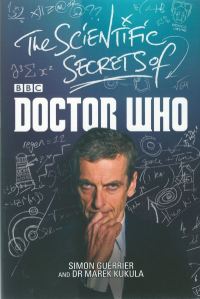 This next one doesn’t come out until June 4th, but it’s awesome, and you can pre-order it now! The Scientific Secrets of Doctor Who is a nifty new book discussing the science of my favorite show. It’s also an anthology of short stories. And guess who wrote one about the 12th Doctor? That’s right! Liz is all over the place these days, and I, for one, couldn’t be happier about it.

In addition to writing and planning oodles of coolness, Liz has followed in my very own footsteps and taken on producing/editing duties for a podcast about a classic British sci-fi tv show. No, it’s not another Doctor Who podcast, though this show does share some Who DNA. Liz, along with Michael and Amal (whom you may remember from the first part of this post) and author Scott Lynch are launching a new podcast about Blake’s 7. They’re starting from the beginning and watching all the way through.

Amal has never seen B7, so I look forward to hearing her views. They’re taking a page from The Audio Guide to Babylon 5 and kicking Amal out partway through each podcast episode so those in the know can jabber about each ep in the context of the entire series. I love that they’re giving the best of both worlds, so the podcast is suitable for n00bs and hardcore fans.

I can’t wait for them to get into it. They’ve released an “Episode 0” to introduce themselves and the show, and I already love the chemistry of the hosts. And Liz did an excellent job editing the thing together and achieving quality audio (something without which I would honestly not bother listening). The first ep drops on May 21st, and I’m not-so-patiently checking my watch waiting for next week Thursday to come.

Golly gee willikers! Once again, I have a few more cool people to talk about, but this is already getting unwieldy.** I shall go and do something less cool than all these folks now.*** And I shall try my bestest not to let 8 months go by before I write my next Cool People post!

Because that just wouldn’t be cool.

*Please note that I don’t know the fourth member of this podcast, Scott Lynch, so I couldn’t really include him as one of my friends for the purposes of this post. That said, after listening to episode 0 of Down and Safe, I feel pretty confident calling him cool. Not only does he have a PERFECT voice for podcasting, but he knows his stuff when it comes to B7 and Doctor Who. And he’s from Wisconsin, so he gets automatic cool-points. (#homesick) I look forward to hearing more from this fellow!

**I blame Liz for excessive coolness.

***I wish I was going to edit a podcast or something so I could be cool too, but I’ve finished this week’s Verity!, and now it’s just suppertime. So uncool.