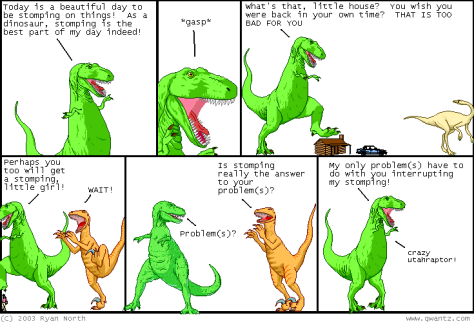 I recently stumbled across my notes from an Incomparable episode we recorded way back in 2014. I thought I’d pull them together and flesh them out to make a series of blog posts because web comics are cool goshdarnit! Check out my posts on Sluggy Freelance, Questionable Content, and The Order of the Stick!

Dinosaur Comics is the brain child of Ryan North. He’s Canadian! But that’s not why I like the comic. I like it because it’s funny and inventive. Every strip uses the same artwork, so you might think it’s not exactly a haven for creativity. Au contraire! Being constrained by the form has made Ryan stretch to find other ways of making it interesting. And boy howdy, does he succeed. END_OF_DOCUMENT_TOKEN_TO_BE_REPLACED

The Katharine Hepburn Project is alive and well! You may have noticed I didn’t stick to my pledge of one-movie-per-month in June. I thought I’d do two in July to make up for it, but I’m swiftly running out of time. We’ll see if that happens. If not, August becomes the double-up month! Anyway, on to our feature. 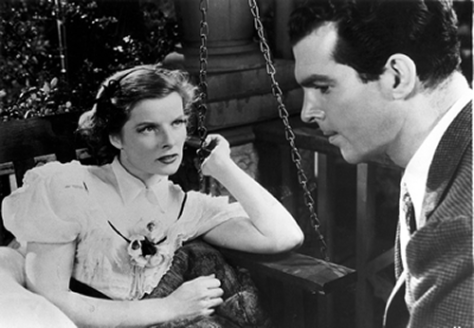 Alice Adams, the next Katharine Hepburn movie available (chronologically) on iTunes, is a portrait of a young woman who wants desperately to belong to the “in-crowd”. Sadly, she can’t because her family is poor. The film opens with her preparing for and attending a dance at a rich girl’s house. She’s purchased a powder puff she’s very proud of, and she’s added new flounces to disguise a two-year-old organdy dress. To add insult to injury, her unwilling brother is her escort. He spends most of the night playing craps in the coat closet with the staff.

Alice spends most of the time hovering in the hallway, pretending to be waiting for her escort and looking longingly at the fellows passing by, hoping desperately that someone (other than “Fat Frank Dowling”) will ask her to dance. Eventually, our hunky male lead, Mr. Arthur Russell, does just that. This is the youngest I’ve ever seen Fred MacMurray, and golly gee whillikers does he look just like Benedict Cumberbatch. I have to admit I wasn’t a fan of this movie, but it gets a thumbs-up in the eye-candy department. END_OF_DOCUMENT_TOKEN_TO_BE_REPLACED

This morning was a learning-morning for me. Those aren’t always fun, but they’re always good. I was having a bit of the old morning-anxiety-brain, and something I heard on a podcast really triggered it into high gear. The thing and the podcast are beside the point. My reaction is not. That reaction was to tweet about it. Sometimes that’s an okay thing to do, but as most celebrities and congressmen will tell you, it’s not always the smartest choice.

The problem was I came at it from a really selfish viewpoint. As if my reaction was universal (certainly not), or even common (who knows?). And the really dumb thing I did was tag the podcast and podcasters involved. Oy. My thought process at the time was this:

I love this thing SO MUCH I want it to succeed in every way possible! And there’s this thing that really bothered me that might make it less successful! I should shout it from the tweet-tops!

But outside of my head it looked like this:

I have a problem with how someone else does something so I’m complaining about it loudly on the internet! And not only that, but I’m telling someone else how they should make their own thing!

Duuuude. Not a good call. END_OF_DOCUMENT_TOKEN_TO_BE_REPLACED 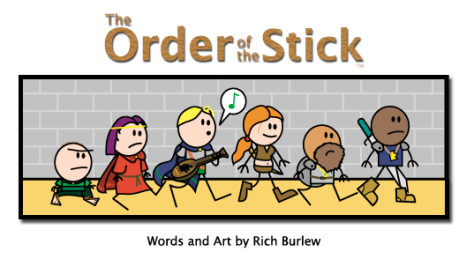 I recently stumbled across my notes from an Incomparable episode we recorded way back in 2014. I thought I’d pull them together and flesh them out to make a series of blog posts because web comics are cool goshdarnit! And know there are more out there than these. (The other comics we talked about in The Incomparable #220 are just the tip of the iceberg, I’m sure!) Let me know what your favorites are in the comments!

The Order of the Stick

The Order of the Stick is a web comic created by Rich Burlew that lovingly satirizes table-top RPGs, Dungeons and Dragons specifically. The characters are stick figures, as you may have guessed from the title, but they have surprisingly effective and emotive faces. He captures mood and emotion far better than some artists manage with more realistic styles.

“The Order of the Stick” is the name of an adventuring crew made up of the usual suspects—human fighter, rogue, and bard, dwarven paladin, halfling ranger, elven wizard. Only one, the rogue, is female (probably—the elf is gender-unspecified, which I like), but I find it hard to be upset about the lack of female representation in the principals. If the party was gender-balanced, it wouldn’t work so well as satire. There are oodles of other female characters in the world, and they only occasionally conform to traditional gender-roles, which is super-awesome. There’s one great interaction between Haley, the female rogue of the party, and another female character in which they hilariously make mockery of how gender roles typically play out in D&D.*

The cast is racially diverse as well–at least as far as I can tell from stick figures. END_OF_DOCUMENT_TOKEN_TO_BE_REPLACED

I know I’ve been largely quiet of late, which means I haven’t chugged through the patron-inspired posts as quickly as I’d hoped. For that, I am sorry. Life and brain chemistry got in the way. But I am back on the horse,* and today I bring you words about a doozy of a patron-requested topic.

You may remember Mike Huberty from my most recent Cool People Doing Cool Things post. In addition to rocking and podcasting, Mike loves TV. And he has a ridiculously good memory for shows that ran for a very short time during his childhood. He asked me to watch one of those for the blog. Speaking of his podcast, the themes of today’s show fit perfectly alongside the topics on See You on the Other Side. So with no further ado, let’s get into it!

Shadow Chasers is a maybe-spooky-maybe-silly show created by Brian Grazer and Kenneth Johnson. It ran 14 episodes in 1985 and chronicles the adventures of Serious Scientist Jonathan MacKensie (played by Trevor Eve) and tabloid journalist/novelist Edgar “Benny” Benedek (played by Dennis Dugan). They travel around and investigate reports of strange occurrences. The pilot, however, is the getting-the-band-together story. At the start, Benny is in the offices of The National Register. This the craziest of tabloids, judging by the newsroom in the first scene—it’s got everything from Elvis as an alien to a dude meditating on a desk with flames coming out of his palms. It’s worth noting that the blocking, acting, and timing of this scene smacks of cable access. You can’t even hear most of the dialogue. Happily, the direction does get better from here. Anyway, Benny hears about a house in California that started on fire spontaneously, and decides it’s a story worth checking out.

Meanwhile, Jonathan is trying to edge out of his father’s shadow at the fictional Georgetown Institute. His department head semi-blackmails Jonathan into heading to California to study the very same case Benny is looking into. She wants him to see if there’s any truth behind the reports of supernatural occurrences. She knows he’ll investigate in a thorough and unbiased manner because he’s a skeptic, you see.

As you might have picked up, this is something of an X-Files before there was an X-Files. END_OF_DOCUMENT_TOKEN_TO_BE_REPLACED

It’s time for more coolness! Welcome to the fourth installment of my periodic roundup of fantastic friends and their creative creations. And if you haven’t already, do check out the first, second, and third posts of this kind!

I met Kyle via Twitter. In fact, I think I was one of his first followers, thanks to Chris Hardwick tweeting about him. Kyle writes for Nerdist.com, you see. But that particular coolness is not the one I’m here to share. Before I get to that, I do recommend you read his sweet Nerdist articles. Among all the other fab stuff he writes, he recently finished up a couple series of posts–a Cowboy Bebop review/discussion, and a Miyazaki Masterclass. I must admit I haven’t read them yet because I’ve barely scratched the surface of Miyazaki, and haven’t seen any of Cowboy Bebop. I know I need to rectify both those. I look forward to reading his wise words when I’m finally in-the-know. If you already are, then yay you! Go forth and read without fear of spoilers!