Once again it’s time for another installment of The Katharine Hepburn Project! Actually, it’s time and then some. I watched The Philadelphia Story ages ago and have been putting off writing about it. But there’s no time like the present, so without further ado, here we go. Oh, and this review has no major spoilers, so if you haven’t seen this picture, you can read on safely. But do yourself a favor and watch it as soon as you have the chance. You can thank me later. 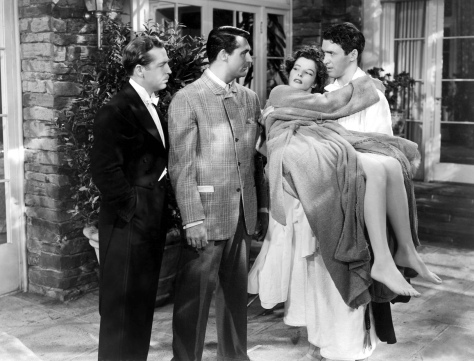 The first time I saw The Philadelphia Story, it wasn’t The Philadelphia Story. In 1953, Bing Crosby, Grace Kelly, and Frank Sinatra remade it as a film called High Society. That’s how I first stumbled across this story. They showed it on AMC or TCM, and I quite enjoyed it. My father, however, was appalled that I didn’t know the original. It’s not like it was my fault, but he made it clearHigh Society was a silly and inferior imitation.

Having seen them both, I agree with him, but it was many years before I could make that determination. This was back in the days before you could call up so many films at the touch of a button. Pre-Netflix, pre-iTunes. We had the library and video stores, but I never ran across the original film until much later. And for the record, I do still enjoy High Society. It was fun. But it wasn’t a patch on the original. But to be honest, the first time I saw The Philadelphia Story, I didn’t really get why it was such a big deal.

I think perhaps it had been built up too much. END_OF_DOCUMENT_TOKEN_TO_BE_REPLACED

As I wrote about a couple days ago, the BBC made a BIG ANNOUNCEMENT regarding Doctor Who. I was hoping my cynicism was misplaced and there would be news that was as “MASSIVE” as they claimed. Alas, my cynicism was spot on. The announcement was a new spin-off, a YA series to be set at Coal Hill School called Class.

This is a great thing. I’m thrilled my favorite show is doing well enough to spawn yet another spin-off. I’m not personally excited about watching it, but I’ll give it a chance, and perhaps I’ll adore it and become a “massive” fan. It’s entirely possible. So let me make it clear, I do think this announcement is excellent news.

What I don’t think it is: MASSIVE. Or HUGE. (I’m using all-caps here because that’s what the promo tweets did.) END_OF_DOCUMENT_TOKEN_TO_BE_REPLACED

So according to the Doctor Who Official Twitter feed, there’s a BIG ANNOUNCEMENT coming from the BBC about Doctor Who. Is anyone else having flashbacks to when they had an ICONIC announcement that turned out to be…not-so-iconic? And the fact they keep saying it’s coming soon–or as soon as they can? Makes it look like they don’t have all their ducks in a row. I find it rather irritating. I’m all for good news, but it irks me when they start teasing something they’re not ready to go ahead with. I like it better when the marketing engine behind my favorite show looks like they have their shit together.

Anyway, the speculation on Twitter has been something delightful to behold. From the truly ridiculous to the…well, to the truly ridiculous! My gut-reaction guess was that David Tennant is going to guest in an episode. (This follows along with some speculation about how we may find out why the 12th Doctor has the same face as an ancient Roman.) But in my heart, I hope it’ll be something about missing episodes. I have no good reason to think that’ll be it, but the delay does make me suspect it’s something more involved than a mere casting announcement.

If the announcement isn’t going out as early as originally planned (which seems to be the case), there’s gotta be a reason. END_OF_DOCUMENT_TOKEN_TO_BE_REPLACED