As promised, here’s the first installment of  my travel diary from the UK. It’ll be sparse in places because I didn’t remember to take notes every day, but it should give an idea of what we got up to and how much fun we had! 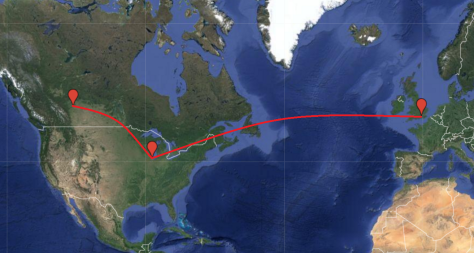 Steven and I woke up at a decent hour because our flight didn’t leave until the afternoon. It’s been ages since I haven’t had to get up at stupid’o’clock to get to the airport. We packed up all our stuff to drive to the airport around 11:30am. So civilised!

We recently got NEXUS cards, but we hadn’t done the retina scans yet, so we waited for a while at the enrollment centre office at the airport to have our eyeballs scanned. Our NEXUS enrollment is now complete! (In case you’re not familiar with NEXUS/Global Entry, that means we can bypass the regular customs lines in Canada and the US. We get to use automated kiosks instead because we’re “trusted travellers”.)

Then we immediately got to use our NEXUS cards for the first time. That got us through both security and customs faster! Not all airports have a separate NEXUS line for security, but Edmonton International does! Hooray!

We made a stop at the little news stand where we bought our wedding rings to buy (another) backup ring for me. Yes, I’ve already lost one. And now we have two different styles that we change back and forth from, so I needed a spare of the black style, just in case. It’s true. Our wedding rings cost about $14 and came from the airport. That is so very “us”. 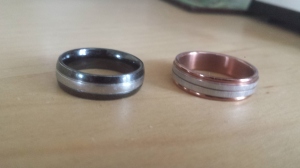 We always have breakfast at Wings, an airport restaurant, and the fact that it was around 1:30 in the afternoon didn’t stop us. It was yummy, as always.

Our flight to O’Hare was smooth and arrived early! (This happens often for me. Steven is amazed every time.)

We ate lunch at a Chinese fast-food restaurant (Manchu Wok) in the food court. It was very mediocre (like, very), but it was quick and filling and they had food both of us could eat.

We spent some time charging our phones in the waiting area across from our gate. I almost don’t remember what it was like to travel before cell phones. It seems like hunting for outlets is the first thing I do when I arrive for a layover anymore.

Eventually we boarded our flight to Heathrow, got settled, and ate a meal on the plane. That was a first for me. I’d never had anything more than snacks on a plane. (I’d also never flown longer than four or five hours.) Steven had pasta, and I got meatloaf I didn’t eat. For one thing, it was terrible. For another, the flight attendant had mis-read the ingredients when he told me there was no wheat in it. Oh well. Luckily there was salted caramel gelato for dessert! Steven, because he is a kind and generous human being, gave me most of his. Hashtag-true-love.

During our eight-hour flight, Steven only slept for about 15 minutes. I don’t think I really slept at all. I’d taken a Tylenol-3 for the herniated disc in by back, and I assumed it would help mellow me out enough to snooze. It didn’t. I was mellow as all get-out, but I couldn’t drop off. I read some, watched some random sitcoms on the free in-flight entertainment channels, and spent a lot of time chillin’ out with my eyes closed. Could just never quite manage actual sleep.

As it turned out, that was a good thing, because it helped me beat jet-lag almost entirely! But I’ll save that for Day 2.