Our continuing adventures in the UK! Check out Day 1, Day 2, and Day 3 if you missed them.

Steven and I met Warren and Simon at the British Museum around 11am (after another low-key morning eating cereal and hard-boiled eggs in our adorable studio). To get there, we walked down Gower Street. It was a lovely walk, and we passed a couple notable sites on the way. Unexpectedly, we wandered past RADA. Steven, of course, shouted “RAAADAAA” in true Tom Baker fashion. 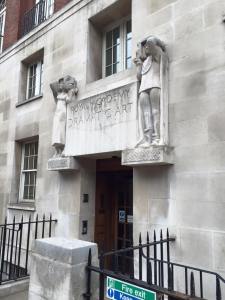 We also discovered our hotel was only a block from where they shoot the exterior shots for Sherlock. 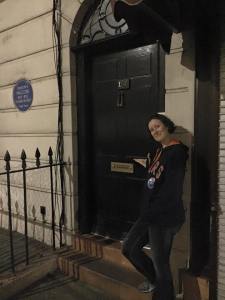 In fact, Bobo can show you just how close we were:

We decided not to tackle too much of the British Museum in one day. I was most interested in the Rosetta Stone and spent some quality time staring at it. It’s much thicker than I expected. We also took in most of the Egypt exhibit. Steven’s been to Egypt, so that was extra-exciting for him. Simon treated us all to coffee from one of the cafes in the lobby area, and Steven spent some quality time shopping in the gift shoppe. END_OF_DOCUMENT_TOKEN_TO_BE_REPLACED 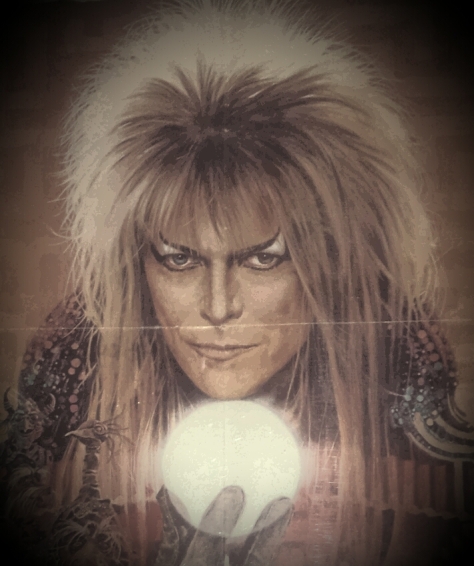 Nothing feels quite right today. It’s as if some of the light has gone out of the world. I’ve turned on all the lamps, but it hasn’t helped much.

I’m not going to write a beautiful retrospective about David Bowie’s life here. There will be plenty of those around for the next few days, and they’ll be well-researched and well-edited, and if that’s the kind of thing that helps you through your grief or satisfies your curiosity, I’m pleased they’re out there for you.

I don’t process grief that way. I won’t be listening to Bowie tunes all day. I won’t be watching Labyrinth. (Now, that feels odd to say. I’ve seen that movie more times than any other. It’s my comfort-movie. But not today.) I won’t be reading any more about him than the bare minimum I encounter in tweets as I turn to social media to keep me connected to the world.

I need to keep my distance. I know that about myself. If I start to wallow, the ship that is my mental health will founder in deep, dark waters, and I need to keep afloat.

I will say this though, The Rise and Fall of Ziggy Stardust and the Spiders from Mars is my favorite album ever. I didn’t just decide that this morning (though that’s the kind of thing I might do); it’s been my favorite ever since I was a kid. It taught me the concept of a concept album. I hadn’t known you could do science fiction in music. I hadn’t known science fiction could make you feel so deeply. (I hadn’t yet discovered some of my SF favorites at the time, and even if I had, I don’t know if they ever affected me on a level like Ziggy did.)

I never did deep-dive into his entire canon. I loved a few bits intensely and left the rest for the folks who appreciated it properly. I was glad others did because a man with so much beauty and creativity deserved to have every ounce of his output passionately loved by someone.

It was Bowie who taught me about panning (the music-production technique–not searching for gold in a river). The summer after high school, I worked at a dinky little movie theater as an assistant manager/projectionist. When I was alone, closing up for the night, I’d blast a Bowie greatest-hits tape as I cleaned and did the books. The music player was an old (even at the time) boom-box with one speaker in the office and one speaker out in the concessions area. I noticed some songs sounded completely different, depending which room I was in. I’d miss some vocals while I scrubbed the popcorn popper, and miss others while I filled out paperwork. It blew my mind, and I had to rush home to listen through headphones to experience it fully.

And of course, there’s Labyrinth. The emotional connection I have with that film is still somewhat baffling in its intensity. I discovered it well after it came out. I was in the latter years of high school, I think. So by now, as I said, I’ve seen it many, many times. When life gets tough, and I need comfort, that’s what I most often turn to. During my freshman year of college, when I was away from home for the first time and really floundering in the not-even-quite-real world, I watched it almost nightly. My roommate was amazed (and a little disturbed) by my ability to fall asleep while watching but wake up for every. single. Bowie. scene.

It, and he, were perfectly keyed in to a part of my subconscious, a part of my soul, that wouldn’t allow me to miss a moment. Not of Jareth. Everything about that film was tailor-made for my tastes, from the Henson puppets to the shimmery sparkles all over the labyrinth set to the drama-queen main character to the girl-escapes-boring-life-into-a-magical-wonderland story.

But at the center of it all was Him. This man, this king, this creature of strangeness and beauty. I was drawn to Jareth like a helpless needle to the North Pole or the proverbial moth to a flame. And he was both cold and hot all at once. He was sad and lonely and every bit as lost as the girl wandering his labyrinth. And his music…oh his music.

I liked every song in the film; Bowie wrote them all, of course. But the ones Jareth sang to Sarah, they cut me. They were the ones I rewound to watch over and over. In a silly film about a girl and a baby and puppets, I found a character more damaged and flawed, beautiful and powerful, terrible and needy than any other I’d fallen in love with before.

I know I was supposed to root for Sarah to rescue her brother and live happily ever after, but I never did. I wanted her to see the Goblin King for who he truly was, recognize his pain, and do whatever it took to heal them both. In my mind, I took her place and did this a thousand thousand times.

And that was all down to Bowie. His performance and his songs elevated a sweet, lovely film to a layered, heartbreaking tale, that overflows the screen and seeps into the very soul of those who watch and understand.

As I said, I’ve turned on all the lights. A monochrome day hangs outside the window. The extra light bolsters my flagging spirit, as do the stuffed, plush doggie leaning on my leg and the fuzzy cupcake pants I’m inhabiting and the even-fuzzier green blanket on the also-fuzzy couch. I’m surrounding myself with softness and light, joy and distraction, comfort and color today because I know that’s what I need right now. Sinking into solace: Yes. Wallowing in wounds: No.

I should be applying for jobs, but I think my cover letters might devolve (evolve?) into lyrics from “Life on Mars” and “Oh You Pretty Things” and “Five Years” and heck, maybe “I’m Afraid of Americans” would actually help now I live in Canada.

Speaking of Labyrinth, I’ve read some of the other actors they considered for the role of Jareth. I thank my lucky stars things happened the way they did. I thank my lucky stars for every way Bowie touched my life. And I suppose his death won’t bring an end to that. His work, his art, is still out there, touching not only me, but countless others.

All of us, individually loving, consuming, appreciating his brilliance. And perhaps more importantly, all of us, together, doing the same. My love of Bowie brought me together with many amazing people. It brought me closer to the amazing people I already knew. And that can only continue.

So thank you, David. Thank you for all of it.

But I’m still crushed to see you go.

I’m fairly lukewarm on the idea of New Year’s resolutions. They don’t really work for me. But that doesn’t mean I don’t think about the year gone by and what I’d like to be different or better in the new one. I’ll work towards those things. But I know that my brain doesn’t like it when I promise things–even to myself. Yes, I suppose it means I’m not holding myself accountable for the things I don’t achieve, but it also means I’m not beating myself up for failing. And I know which is more likely to happen when it comes to my mind.

In fact, forgiving myself and letting go is at the top of my list for 2016. I tend to get obsessive about things like media. If I’ve subscribed to a podcast, I feel like I have to listen to all the episodes. I got a bit better about that last year, and I want to improve more this year. In fact, I just deleted a podcast ep I was only halfway through. It was a Doctor Who podcast, and while I was taking some schadenfreudeical delight in hearing cranky old fans moan about how “Hell Bent” was “a waste of Gallifrey”, there’s only so much of that kind of negativity I can consume without it affecting my mental health. It’s okay to beg off when that starts to happen. I’ve never actually done it before today, and I do feel a little guilty about it, but I’m trying to let that go.

Our continuing adventures in the UK! Check out Day 1 and Day 2 if you missed them.

Thanks to our canny defeat of jet lag, Steven and I woke up at a decent hour. We had time for breakfast in our teeny studio. We discovered that the toothpaste provided was Bobo-sized! 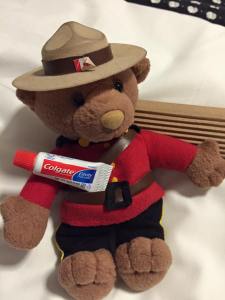 After a leisurely morning in our pad, we met Simon and Warren at Trafalgar square at 11am. Our first solo experience taking the tube was awesome. Everything is so well laid out. The destinations are documented clearly on the walls at each stop. And when we needed to exit the station, there were signs pointing us to all 6 or 7 exits, detailing which streets they led to.

Sadly, Trafalgar Square was partitioned off because the rugby world cup had been projected on a screen there the night before. They were still taking down all the chairs. We took a few pics before Simon and Warren arrived anyway. END_OF_DOCUMENT_TOKEN_TO_BE_REPLACED

Yesterday I started my job search in earnest. I don’t usually make New Year’s resolutions, but I suppose “getting a job” could be considered one. And one I really need to carry out, at that!

A nearly-inescapable facet of job-hunting is the dreaded interview process–or, in my case, not-so-dreaded. Interviewing is my favorite part of the job-search process. I honestly love interviews.

Why? My joke answer is always, “I get to sit in a room for an hour and talk about myself. What’s not to like?” But the truth is more nuanced. What I really like is not so much talking about myself as it is talking about something I know. I love chatting about a subject where I feel like an expert. This is why I love podcasting so much–especially about Doctor Who. I know a lot about it, so talking about it is fun.

In a job interview, no one in the room is more knowledgeable about the subject than I am because I am the subject. END_OF_DOCUMENT_TOKEN_TO_BE_REPLACED