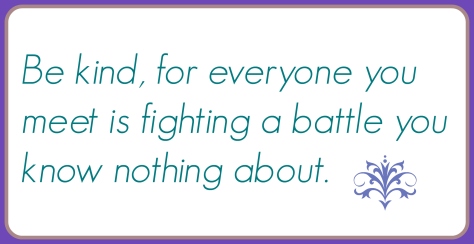 I’ve had a rough few days, but you might not know that. The quote in the image above is something I’ve thought a lot about lately. The sentiment isn’t new to me, but I hadn’t seen it put that way until this year’s Bell Let’s Talk Day, when someone tweeted it. There were scores of wonderful tweets about mental health, but that’s the one that legitimately brought tears to my eyes.

Over the last couple days, I’ve gotten a lot done. I’ve been productive, active, and involved with those around me. I applied for jobs. I recorded podcasts. I exercised. I cooked and cleaned. I also spent some interesting time looking at myself from the outside (as much as that’s possible), and I realized I mostly looked like a happy-go-lucky contributing member of society.

Inside, there was a frustrating imbalance of chemicals which made each productive act, each tweet, each smile, an uphill battle. A cocktail of anxiety* and depression was a gooey, foggy barrier I had to penetrate to achieve every step. But I did it. And very likely, no one (except maybe the one person who lives with me) knew the effort that went into even the little things.

While this does happen from time to time, I don’t think about applying this lesson to people beyond myself nearly often enough. I interact with oodles of people each day, both IRL and online. Each and every one of those folks is dealing with something (many things) I’m not aware of. I pride myself on having patience and not judging people too harshly, but I don’t usually think about why I ought to have that patience and lack of judgement.

Patience with folks who aren’t at their best is only part of the issue. In fact, that’s the easy part. If someone is having a tantrum or a meltdown, I tend to assume they’re dealing with something tough. But what about the scads of people who seem A-okay? The folks who are just going about their business as normal? Even the folks who seem really jazzed about what’s going on in their lives? I often assume all is right with their worlds, but for many folks, that’s not the case.

If someone isn’t sharing their struggle, that’s their choice. I’m not going to start prying into the personal lives of everyone I know. But I am going to remember the face we show the world doesn’t always reflect what’s on the inside, and I will keep the quotation in the back of my head:

Be kind, for everyone you meet is fighting a battle you know nothing about.**

If it helps me inject just a little bit more kindness and warmth into my everyday interactions, it’s worth it. The random and general niceness I’ve encountered over the last few days was a real boon as I struggled through the weekend. I’d like to be that boon for someone else. Even if I never know it.

*In fact, anxiety was a bit worse than the depression, but I included depression in the title of this post because it flows better when you read it, don’t you think?

**A Google search reveals this quotation is attributed to Wendy Mass from The Candymakers.