Saturday at Gallifrey One was my least panel-filled day, but it was still full of goodness!

My only official panel that day was Ninth Symphony, discussing series 9 of Doctor Who. I was the moderator, but I tag-teamed with Derek Kompare, scholar-extraordinaire and friend-of-the-podcast. We chatted about it on Friday, and he had great ideas for how to tackle the subject. (Going episode-by-episode is impossible in an hour because you’ll never get through everything!) So Derek directed what we talked about while I made sure everyone got a chance to speak, played traffic cop, and called on audience members for questions.

Speaking of audience questions, unlike some panels I’ve mentioned, the audience for this panel was fab. They asked interesting, insightful questions and made germane observations. The panelists themselves were wonderful too. I’d been worried about wrangling so many panelists, but goodness gracious did I get lucky! Everyone was exceedingly respectful. No one talked over each other or cut anyone off. Each panelist brought their own unique views, which didn’t always match up, but were delivered without rancor. Everyone, down to the least-in-love-with-Moffat of us, focused mostly on the positive, and it made for a great discussion. A couple people approached me hours after the panel saying how great it was. One woman said she wished it could have gone on and on and on. I rather agree!

Immediately after this panel was one of the true highlights of the weekend, the Verity! Podcast Meet-Up! The turnout was overwhelming. I had to race up to the 18th floor from my panel, so when I arrived, it was already standing room only. For a moment, I thought I must be in the wrong place! But no, dozens of lovely, enthusiastic Verity! listeners were milling about, making connections, chatting, eating cake (thanks Andre!), and having a grand old time! 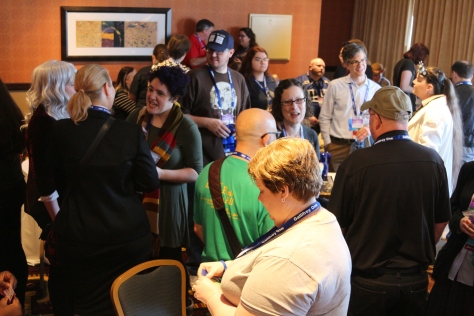 In fact, I think it was so crowded, some people left earlier than they would have otherwise. So while I didn’t get to talk to everyone who showed up, I got to chat with tons of people and collected more ribbons than I’ve ever had at Gally before! Huge thanks to each one of you for coming out and supporting the podcast. It wouldn’t be the same without you!

Next order of business was, of course, to record a podcast! Jason Snell of The Incomparable podcast network was there, so between The Incomparable, The Audio Guide to Babylon 5, and the Verity! crew, we had plenty of people to play a silly game show (a Doctor Who version of something kinda sorta like The Match Game, or if you’re from the UK, Blankety-Blank). This was one of the more delightful podcast recording experiences I’ve ever had. It was fun and silly and just as we were about to hit record, the fire alarm went off! That would have been annoying, but we saw four Cybermen sloooowly exiting the building, and I wouldn’t have missed that sight for anything!

That moment when the #Gally1 fire alarm goes off pic.twitter.com/h3U1sgy6vo

After that amusing interlude, we did manage to record a very silly game show. If you need a laugh (or several), check it out: Incomparable Game Show ep 30 Game Night: TARFIS.

Much of that night was spent having cocktails and snacks with some of my besties. It’s an annual tradition to try to get Paul Cornell and my spouse, Steven, liquored up before they have to host/scorekeep the halftime show of the masquerade (Just a Minute). This year they were both disappointingly responsible and we didn’t “pour them out the door” like last year. Perhaps the most exciting moment of that little shindig was the surprise Sprinkles cupcake delivery from Joe Rosensteel, who is the best person.

After the Masquerade, the main hall became the Saturday Night Disco. The disco is something I hadn’t really looked in on much in the past. Last year was the first time I gave it a shot, but I knew almost none of the songs (and I’m picky about what I’ll dance to) so I didn’t really enjoy myself. This year was so much better. The song selection was fab, and even though I wasn’t drinking much, I was still motivated to dance up a storm!

I got to meet Christel and Chris from Doctor Who: The Fan Show during the disco. It’s so fun to talk to fans from across the pond–especially when it’s their first experience with Gally. They seemed to love it as much as I do, which was heartwarming. And Christel’s Ace cosplay was, well, ace! Then I had The Best Time rocking out with the amazing ladies from Head Over Feels. Those classy dames con HARD. Deb says they approach cons like a contact sport, and I cannot argue with that assessment. An abiding Gally memory will be the furious singalong (while dancing) to Taylor Swift’s “Shake it Off”. (Ignore some of what Taylor Swift has said/done as a person, and that song works as a fangirl anthem!) Definitely a con highlight for me.

A bunch of my pals and I sorta camped out on a sofa right outside the main hall, so we always had a place to sit, re-hydrate, and catch our breath between songs that moved us. It was funny how a new song would start and one or more of us would pop up enthusiastically and race for the dance floor.

(Of course, some of us have a different idea of what re-hydration means.)

We were still hanging in the hall when the disco ended, and I feel a real sense of accomplishment for seeing it all the way through. After that, I spent some very sleepy time chatting with folks before stumbling off to bed at a totally-reasonable-for-Gally hour (probably something like 3am).

I call that one heckuva successful day! Of course, with Saturday gone, there was only one day left. I tried to ignore this fact to stave off Gally-blues. It’s hard to know the highest of highs have an end that’s in sight. Good thing there was lots of fun left for Sunday. But I’ll get to that soon enough.