Huzzah! It’s back to patron-inspired posts for me!

Many thanks to Chris Fone for this particular item. It’s easily the most delightfully weird thing I’ve watched for the blog yet! For those not in the know, Art Attack was a British series of short episodes in which Neil Buchanan (who wrote and produced the show) taught kids about cool art projects they could do at home. Apparently there’s a version of it that’s still going on Disney Junior, but that’s not what Chris wanted me to watch and write about. No, it’s the classic I’m here for.

First of all, I’d never heard of this show. It’s totally the kind of thing I would’ve expected to see on PBS, but I don’t think it ever made it there–at least not to the Milwaukee area where I grew up. My spouse, Steven, on the other hand–he remembered it almost immediately! (Yes, I made him watch it with me.) He thought he remembered watching it on YTV in Canada.

I love that this is available on YouTube so you all can watch the glorious VHS transfer like I did. (Complete with sporadic tracking issues–I LOVE IT!) It’s only about 15 minutes, so I do recommend you give it a view for funzies. It’ll make the rest of this post make a lot (or a little?) more sense.

So without further ado, here are my observations about Art Attack:

Neil shows us how to make a sweet notebook with a raised-molded cover. I kind of want to do this myself. Just before he gets into the crafting though, he picks up a book and waves it at the camera, boasting how it’s 150 years old! I have my doubts. And I found myself thinking my Verity! cohost Lynne (who is an archivist) might have winced mightily at the way he was treating that supposedly venerable artifact.

I think the funniest moment in this whole experience was how confused Steven and I were about one of the materials Neil was using. He said to take something, get it wet, and mold it onto the book cover. It sounded like “lurel” or “loo-rel”? Only later on did we figure out he’d been saying “loo roll”, meaning what we call toilet paper! Just when I think I’m getting a handle on UK accents and jargon, something like this comes along to humble me right up.

Art Attack isn’t all fun and games though. There’s an exceedingly disturbing character called simply, The Head. The Head is a thing out of nightmare. It puns mightily between segments. I wouldn’t mind the silly puns, but the puppet-thing-with-eyes just creeps me right the heck out. Steven’s strongest Art Attack memories were of The Head. This is no surprise. 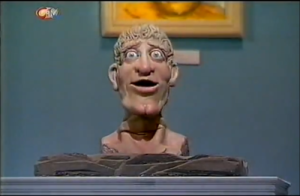 Another thing Steven remembered fairly well was a segment in which Neil used birdseed to draw a huge art piece on a black floor. It was pretty neat. Mellow, soft, adult-contemporary yacht rock drifts soothingly in the background as he pours birdseed all over the floor. At the end, he stands up, looks at the overhead camera, and gestures triumphantly at his creation. Voila!

Another favorite moment is when he shows us how to label our VHS tapes with a correction pen. Our. VHS. Tapes. J’adore.

The last project in this ep is a nifty cutout made from black construction paper laid over a red-orange-yellow background that looks like a sunset. If I had more time (and motivation), that’s one I might try myself.

Anyway, again, thanks to Chris for suggesting this. It was fun! It felt a little like Bob Ross, but for kids, and I love Bob Ross, so that’s a very good thing!

Chris describes himself as a full-time Whovian, part-time Sherlockian and is a geek and real fan of (mostly) British sci-fi. Other properties include Hitchhiker’s and Quatermass. As you can probably tell he enjoys old TV shows, films, radio, comedy, and history programmes in general, but he’s also a great champion of modern programme-making and the BBC in particular. In his spare time he likes to draw and cycle and has an off-and-on obsession with 90s kids tv and Disney films. You can find him tweeting (not as often as he probably should) @2010_Eleven, but he hopes when he does it’s worth it. Recently he happened upon the greatest (in his opinion) podcast in existence, @VerityPodcast, and not two days go by where he can’t re-listen to a least one ep–may their podcast and their members continue for many years to come.