This was a big, long day! Steven and I got up at stupid-o’clock (that’s 4:30am) to take the tube to Epping where we met Simon and Warren in the pouring rain and waited for our pal Dan to pick us up. Dan, because he’s one of the nicest fellows ever, agreed to drive us all the way to Cardiff and back on Wednesday so we could take in the Doctor Who Experience (and not have to check out of our hotel in order to do it).

We stopped at a “service station” (which is like a highway oasis or truck stop) to use the bathrooms and so Dan could get something from Greggs. (Greggs was another thing that was totally new to us.) I bought myself a Kinder hazelnut bar from a vending machine. It was awesome. There were no Kinder products in the US when I was growing up, and I’d never tried the items we have here in Canada, so even my vending machine experience felt exotic.

A proper road trip involves some sort of crazy antics in the car: singing, game-playing, or other such nonsense. Our version of that was plugging Simon’s phone into the speakers so we could listen to Doctor Who incidental music and random British theme tunes for three hours. You haven’t lived until you’ve experienced the K-9 and Company theme in a moving car. Several times. And then as a sing-along.

In Cardiff we parked in a lot–ahem–excuse me, a car park (we were razzed for calling it a parking lot repeatedly) that gave out little tokens instead of tickets. Cute! From there we walked over to the Experience. Steven had arranged for a few of us to get in for free. Podcasting has its privileges!

We were met by J.R. Southall before we went in, so it was a merry band of travelers who went on the Adventure together. The first bit (the Adventure part) is quite neat, though clearly aimed more at children than at the group of middle-aged folks who went through with us. I won’t spoil it in case any of you get a chance to go, but there are video screens on which you get to see the Doctor, and he “interacts” with you. And of course, you help him save the universe! Steven helped pilot the TARDIS and even found some nifty glowing crystals that helped us win. Thanks for saving us Steven!

After you’ve completed the Adventure, you get access to the huge exhibit section. We spent a LOT of time there. Steven, Warren, and Simon were working on what was then a secret project, so I had pleeeeenty of time to wander around and look at all the stuff they have on display. I was most interested in/impressed by the TARDIS console room sets and the TARDISes themselves. Also K-9, of course!

TARDIS console from An Adventure in Space and Time 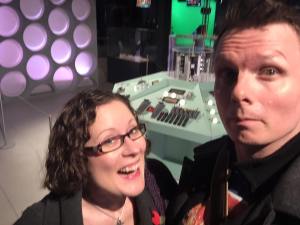 And the obligatory selfie in front of it. 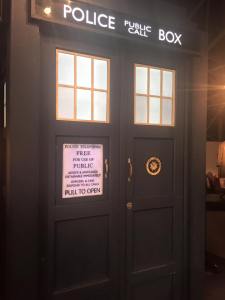 I will never get tired of seeing the TARDIS in person.

I don’t care what Andrew Smith says, K-9 is tops! 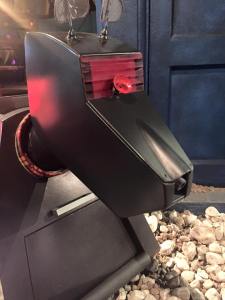 How can you not love that face?

I positively adore “The Keeper of Traken”. Yes, Melkur, I’ll take care of you!

Some of the models were SCARY-lifelike.

Costumes for all the Doctors!

This was neat, but I have to admit, the costume was more impressive on TV.

All in all, I’m not really a museum person, and I get bored walking around and looking at stuff. Even if that stuff is as cool as Jenna Coleman’s costume from “Mummy on the Orient Express”. (She is a tiny person. All her costumes looked doll-sized.) So I was glad when the boys finished all their clandestine shooting. (Which soon became a lot less clandestine because nobody seemed to care that they were taking pictures and filming.) Afterwards, we hit the gift shop briefly and then Gary Russell (who happened to be back from Australia at just the right time!) met us there and took us on a walking tour of Cardiff Bay shooting locations for DW, Torchwood, and The Sarah Jane Adventures. This was so awesome. Easily one of the highlights of the whole trip. Gary wrote the original official walking tour, which wasn’t available for us to take that day. We got it anyway! Huzzah!

The Millennium Centre is a super-impressive building. 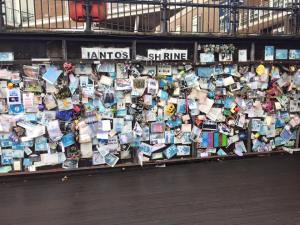 No trip to Cardiff is complete without a stop at Ianto’s Shrine.

The last stop on our little tour was Eddie’s American Diner, where they shot the diner scene in “The Impossible Astronaut”. The food was pretty lousy, but I got to sit in the booth where the Doctor met Amy and Rory. Mediocre burgers and thin, flavorless milkshakes couldn’t take the shine off the day. And the company was great! Warren’s friend Jake and Jake’s brother met us there after going through the Experience themselves. A good time was had by all. 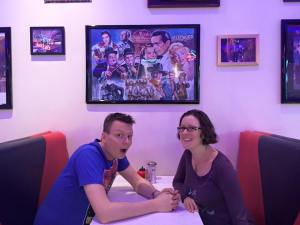 Same booth! #TheDoctorWasHere (And at the time we had no idea we were INSIDE CLARA’S TARDIS!)

After all that fun, it was time to head back to London. This was kinda sad until Gary walked us to the car park and we realized we’d see him again in a week at LI Who!

Before leaving Cardiff, we went to the Toys’R’Us, where they had NO 5″ Capaldi action figures (or any other 5″ figures, for that matter). Boo-urns. Steven bought a 4th Doctor sonic screwdriver instead. He also bought Simon and I ice cream treats. In the UK they have Magnum ice cream bars coated in white chocolate! YUM! (It’s probably a good thing I’ve never seen those over here.) Steven put a pound into a vending machine and got a teeny Dalek! (Though we had to complain to the cashier that the machine ate his pound the first time.)

On the way home, Steven, Simon, and Warren napped in the car for a while. My streak of being a terrible napper continued. Luckily, all the fellas woke up after a while and it was time for more theme tunes and DW incidental music. As you do.

We stopped at the same exit on the way back (but on the other side of the highway) for coffee and snacks. It was late, but we still had a while before “home” was in sight, so a little late-night coffee was almost a necessity.

Dan dropped us off at Cockfosters (tee hee), and we all took the tube to King’s Cross/St Pancras station, where we changed to the Northern Line. There, Steven and I went north, while Simon and Warren went south.

When we got back to the hotel we collapsed into bed. But did we go to sleep immediately? No we did not. Instead, we waited for the coffee to wear off while watching an episode of Doctor Who from 1964. As you do. Of course, we also recorded a podcast about it. As we do.

It was a truly brilliant day, despite an awful lot of rain. But wait! There’s more! (Well, there will be when I get around to documenting Day 7.)