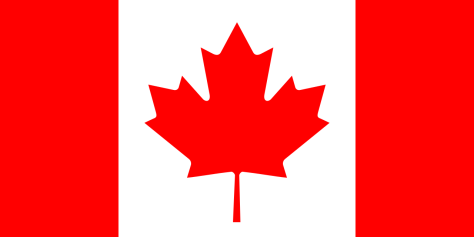 No, it’s not technically Canada Day. Well, not here anyway. As Andrew Smith already pointed out on Twitter, it is in part of the world already!

Tomorrow I’ll celebrate my third Canada Day as a permanent resident of this lovely nation (and my fourth in Canada, as I was visiting on July 1st of 2013). I must admit, I’m a little overwhelmed when I consider that. I still often think of myself as a newbie here (and in many ways I suppose I still am), but it won’t be too long before I can apply for citizenship (which I plan to do). Somewhere along the line, Canada (and Edmonton, specifically) became home.

I still get tripped up when I hear someone say “process”, but I usually remember to ask where the “washroom” is and no longer tilt my head when someone says “loonie” or “toonie”. I’m still getting used to the idea of being represented by an MLA instead of an assemblyman or a senator, but I’m 100% comfortable with the idea of going to the doctor whenever I need to and not worrying about how I’m gonna pay for it. (That last one still makes me deliriously happy, it just doesn’t feel weird anymore.) I think I’ve finally reached the tipping point–where Canadianisms seem more normal than not.

Perhaps the biggest indicator that I’ve acclimated is that this summer hasn’t completely wigged me out. END_OF_DOCUMENT_TOKEN_TO_BE_REPLACED

Yes! I’m a working girl once again. Well, sorta. It’s a temporary gig, but it could possibly maybe lead to something permanent. (Please cross all your fingers and toes for me.)

Now I’m not gonna write much about my job specifically, ’cause I feel like that’d be unprofessional, but I will observe how much I am digging the structure of having a place to go to day in, day out again. I wasn’t looking forward to it, but my brain really craves routine. I wasn’t doing the best job of creating a routine for myself, so my mind-juices have been much more balanced the past week or so than they had been for a while.

If this does end up being a truly temporary position, I’m literally writing this note-to-self to remind me to do a better job of sticking to a schedule and create some at-home structure for myself. I always forget how good that is for me until it’s gone for a while and then back. So yay for that!

Additional yay: I really like the job. I get to write, and I get to organize information and track things to make sure they get done on time–all things at which I excel. Plus it’s walking-distance from home. In the summer in Edmonton, that’s a great thing. And I feel good about what I’m doing so it’s a win all around.

Now if only we could find Steven a job too… Actually, he’s been hard at work getting things set up for the podcast production business we’re launching. (It’ll be a side-gig for me if I end up with a permanent position. If I don’t, then I throw myself into podcasting! Kind of a win-win, really.)

Anyway, we’ve come up with a name which is both deep-dive geeky and perfect: Castria. Gold star to anyone who spots why we picked it. 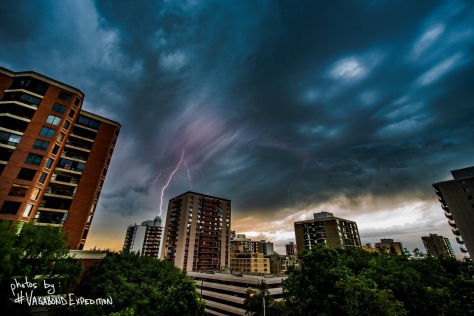 When I decided to move to Edmonton, my spouse and I decided I’d better visit for a while first, to make sure it was a place I could really feel at home. So I took a two-month leave of absence from work and came up to try to settle in and see how I fit. And a year before that, I’d visited for a week just for fun. During those visits, I saw several of the most spectacular lightning storms I’ve ever witnessed.

Before I visited Edmonton, I didn’t realize lightning comes in different colors. I saw the entire sky light up purple and bolts of bright turquoise lightning snaking across the whole sky (with thunder boomers that were nearly as impressive as the light show). It was amazing. I’ve always adored thunderstorms, and it felt like Edmonton was trying to woo me with a spectacular show.

I’ve now lived in Edmonton over two years, and I was starting to think the city had tempted me here under false pretenses. I’d seen not one thunderstorm that qualified as even remotely good in all that time.

Tonight I spent well over an hour sitting on my balcony watching the sky. I have now added pink lightning to my collection. (That picture above actually features my building, and yes, the lightning was that pink color in real life. Some zaps I saw were even pinker.)

And it was one of those odd summer storms that was lots of sound (and light), but not much fury. There was a bit of wind, but almost no rain so I could comfortably sit there listening to this week’s episode of Radio Free Skaro. It was delightful and soothing to simply sit and enjoy myself. (And yes, I did pause the podcast whenever I saw lightning so I’d be ready to hear the accompanying thunder.)

Steven and I are both between jobs right now (Steven was laid off just over a week ago), and I admit I’d considered moving elsewhere to find work. I wonder if Edmonton sensed that and stepped up its storm game to keep me here.

If so, I think it worked.