So this week on Tuesday, I got to do one of my favorite things ever—attend a live NHL hockey game. And it was even more exciting and special than usual because it was my first time seeing a game in Edmonton’s new premier arena, Rogers Place. I’d been there a couple times before—Steven and I went to the open house (and spent three hours wandering around!!), and I saw Dolly Parton there a few weeks back (what a fantastic experience that was!). But this was my first time experiencing it for its primary purpose: HOCKEY.

Steven is a huge fan of sports facilities (see our dining room table for dramatic proof), so we got there shortly after the doors opened. We wanted to experience as much of the festive, expectant atmosphere as possible before we settled down to watch the game. We had a lovely time wandering around the main concourse, and because I’m the best spouse ever, I took this terrifying picture: 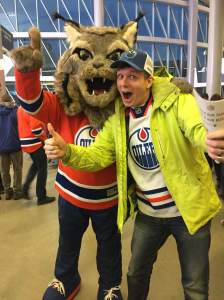 This is our new mascot, Hunter the lynx. Really.

We stopped at the 104 Ave Food Co. for a YEG Nacho Grande. We’d tried this on our first trip to the rink and liked it enough to get it a second time. Though I think probably not a third. I love the sour cream, green onions, and real shredded cheese. However, smoked brisket on nachos just didn’t work for me. Also the cheese sauce was very cloying and not very flavorful, and the salsa was almost ketchup-like. Next time I think I’ll go for the usual cheapie nachos from another stand. I know that basic nacho cheese sauce is about as artificial as it gets, but I really like it.

I was intimidated by the size of the nachos.

We also picked up an orange souvenir Oilers puck in one of the gift shops. New-hockey-superfan Deb gave us the idea of collecting pucks from each rink we visit. We have a few we’ll have to backfill, but it feels good to officially start the collection at home.

That, the nachos, and a Pepsi were the only things we bought in the rink. It’s a fantastic venue, but boy the prices at sporting events are painful. We kept the cup from the Pepsi and refilled it at a drinking fountain to keep hydrated through the rest of the game.

And what a game it was! You can read a dozen different write-ups of the game itself elsewhere, so I’ll just focus on my experience. IT WAS FUN. Our seats were high in the upper bowl, but we could see everything just fine. It was occasionally tough to see the numbers on the jerseys, but that can be a problem from any angle in any rink. Oh, and there was a very drunk bro in the seat in front of me who kept leaning forward, so I could only see the outlines of the Oilers’ attacking end during the first period. Happily, he switched seats with a friend for the second period, so that was better. This isn’t a knock on Rogers Place. That can also happen anywhere. 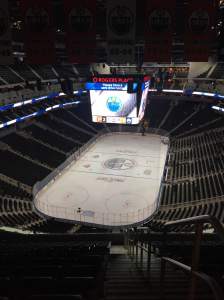 I do have a few complaints though.

#1) The speakers were too damn loud. One of my favorite things about seeing live sports in Canada is hearing the crowd singing the national anthem along with the official singer. Here, all I could hear was the almost-painfully-loud voice of the Oilers’ anthem singer. That made me sad. And then during stoppages in play, the music was blaring almost comically loud. I honestly thought about making myself makeshift earplugs from a napkin. I literally couldn’t talk to Steven right next to me.

#2) The score announcements were late. This one bugged Steven more than me, but it was still kinda weird. The Oilers would score (YAY!), and then the excitement would die down a bit, and instead of popping in with the goal/assist announcement to bring the crowd back up, they let the fervor completely die before announcing the goal. It felt wrong. And by then, the applause and hooting was more subdued than it would have been if they’d gotten the timing right.

#3) The scantily-clad ice girls. At Rexall Place last year, the girls and guys who shoveled the ice during TV time outs all wore sensible track suits. The women’s ones were tailored differently, but were still sensible. Actually, different tailoring is sensible in and of itself—our bodies are generally differently shaped so it’s great to have clothes that fit correctly, especially when you have to move fast. This year, the guys all wore sensible track suits. The women wore low-cut midriff-bearing tops and tight pants. GROSS.

I was SO FREAKING HAPPY when they announced Octane wouldn’t be coming back this season. This was really disappointing. I love my adopted city and my favorite hockey team, and when they choose to objectify women like this it feels like an insulting kick in the gut. Do better Oilers. PLEASE.

But the night was full of great things too. We went down near the ice for warm-ups. I’d never done that before, and it was really exciting! I don’t like to watch games from too close to the ice because I’d rather be able to see where everyone is without depth-perception issues fooling me. But being down there for warm-ups was perfect. 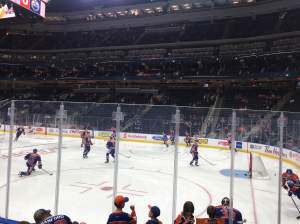 This one gives a sense of the scale of that monstrous scoreboard.

The light/picture show on the ice before the game started was pretty magical too. It was (of course) synced with the music, and used optical illusion trickery to make it look like the ice was dropping down into the floor in places. I’m a sucker for a good light show, and this was definitely one. I also like that they now project pictures of the players onto the ice as they announce them. That’s pretty cool. The pictures were all upside down to us because of the side we were sitting on, so next time I’d like to swap sides. (Not sure how soon we can afford a “next time” with Steven out of work—he did scrape together enough to treat us to this game, but I think it’s belt-tightening time for us both now, alas.)

This wasn’t during the light show, but you can see a few fun Oilers lights on the ice already well before the game.

After seeing the rink during the open house, I was convinced the scoreboard was too big. It was huge and intimidating and distracting. I was fully expecting to feel overwhelmed by its presence (as I did when I saw my first NHL game in Tampa). However, when I was there for an actual game, it didn’t bother me at all. It felt natural to have a screen that size in a rink that large.

It’s really big, but it fits in a place this size.

Another plus: I didn’t have to wait for a bathroom at all. I went before the game and after, and was able to walk right in and have many open stalls to choose from. We didn’t get up from our seats during intermission though, so I’m not sure what the rush was like at that time.

I also appreciated how cheerful and enthusiastic all the Rogers Place employees were. From the metal detector operator to the guy who served us our food to the ushers we spoke with, everyone seemed genuinely happy to be there. It really felt like a city coming together to celebrate something we’re proud of.

And then when we left, the city felt alive. People were gathered outside celebrating and chatting and taking pictures with the Gretzky statue. The guy who plays several upside-down 5-gallon plastic drums as literal drums was there banging away. (He was always around after games at Rexall, so that was a nice bit of Edmonton continuity.) There was a busker with a guitar. We even got to watch a bit of coach Todd McLellan give his post-game press conference from outside. One wall of that press room is entirely glass, and it fronts on 104 Ave. We couldn’t hear anything, but it was cool to just watch it with a crowd of fellow fans.

So overall, I give Rogers Place and our Oilers experience a thumbs up! Hope I get to do it again before too long!

One thought on “Placing Ourselves at Rogers”