I am trying to get better at writing about things and events in a more timely manner, so here’s another quick lunchtime post about my fab Chicago TARDIS weekend! This is clearly a place I could use improvement because I STILL haven’t finished writing about our trip to London, which has now been over a year ago!

The first excitement of the weekend was watching Steven interview Michelle Gomez (Missy) on the main stage. I love watching him do interviews because he makes the guests feel so at-ease. It’s more like watching two people have a conversation than a formal interview. And he asks a lot of questions about the technical side of things, like direction and production details. That’s the kind of thing I find most interesting.

They look so relaxed.

If you want to hear the interview, you’re in luck! It’s on this week’s episode of Radio Free Skaro!

The next event I attended was another Steven-centric one. He did a panel about “Trial of a Time Lord”. I’ve never been a big fan of that season (though I don’t hate it as much as some do), so I was interested to see where the panel fell. Happily, everyone on the panel enjoyed it, so it was a delightful experience. I suppose it makes sense that the people to sign up were the ones excited to talk about it. 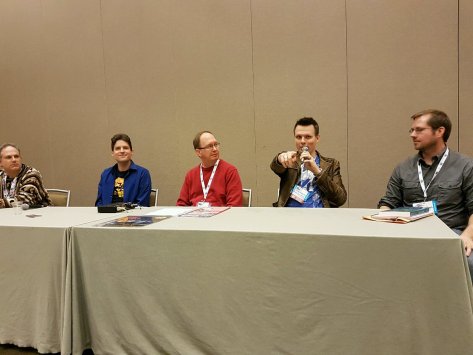 Steven is introducing himself and pointing to me as he mentions Lazy Doctor Who. He is not calling me out for being a Trial hater. (That happened later.)

I’m still not convinced that season 23 is great, but it was fun watching five people talk about something they love. And a couple of them agreed with me that “Terror of the Vervoids” is the best story in the season.

My next thing was super-duper fun: a panel called Forty Years of the Tin Dog, where I got to talk about K-9 for an hour. I adore K-9, as you already know if you’ve read my essay in this. What made it even better was my pals Robert Shearman and Gary Russell were also on the panel with me. They may be VERY WRONG about Nyssa, but I love them anyway.

I swear I wasn’t looking at my watch through the whole panel. It was just bad timing when this pic was snapped!

It was a fun panel, in which I introduced Gary to the term “headcanon”. Not sure how he’s managed to avoid hearing that word, but if anyone could manage it, I’m not surprised it’s Gary. :)

And with that, my lunch is at an end. I will try to share more fun memories later.

ETA: The K-9 panel pic. Photo credit for this and the pic of Steven and Michelle goes to Chicago TARDIS. You can find these and other great pics on their Facebook page.