[For an audio version of this article, please listen to Episode 15 of Recently Read on The Incomparable podcast network.]

The Friday Report Presents: Everything You Need To Know about True Blue Aussie Beaut Superheroes, But Were Afraid To Ask

That’s the title of the first chapter of Girl Reporter by Tansy Rayner Roberts. It’s the story of Friday Valentina, daughter of one of the world’s most famous reporters. Friday is a successful reporter in her own right, in the mileu of “new media”—she’s a YouTube vlogger, a live-tweeter, and always has her phone at hand to capture the story. This gets much trickier when the story at hand, the one she’s been avoiding for a while, is this: her famous mother is missing, and her found-family-brother, who happens to be a superhero, thinks they should do something about it.

I should mention that in this version of the world, Australia (along with every other country) has mysterious machines that turn people into superheroes. In Australia, there are five heroes at any given time. Every six months, a new hero is chosen, and one of the existing five retires. These heroes are not only saviors of the world, but celebrities—gracing the covers of magazines and inspiring royal-family-level gossip and speculation. Friday’s mother made her name getting the first interview with one of the heroes, and there’s a very good chance her disappearance has something to do with this. (I won’t spoil where she is or who she’s with, but it’s a helluva reveal.)

Like a fool, I started reading this novella at bedtime, expecting to get a couple chapters in and then fall asleep like I usually do. Alas, the relatable determination and snark of the main character, along with the lively prose, kept me awake and interested—while the intense need to know what happened next kept me turning the virtual pages until I’d finished the whole book. And then, because I just wanted a little bit more about this fantastic story, I read the afterward, in which Roberts admits this story is a love-letter to all the “girl reporters” in comics—the women with no superpowers but plenty of resolve, resourcefulness, and raw talent.

I knew this wasn’t Roberts’ first time writing in this universe, as I’d read her short story “Cookie Cutter Hero” in the Kaleidoscope anthology. That story explains how the “new” Solar (a teenage girl with one hand) received her superhero powers, but I didn’t realize this was the second *book* in this universe until the next day when I looked it up on Goodreads. To be honest, it really didn’t matter that it was a sequel. I got all the context I needed, and I was never confused about what was happening or why. (Though I am definitely gonna go back and read book one, Kid Dark Against the Machine.)

I really recommend Girl Reporter, especially if you have any fondness for superhero-fiction. Roberts pokes fun at the tropes while demonstrating she knows and loves them oh-so-well. I should warn you though, if you don’t like to laugh at (and with) your heroes, this book may not be for you. Also, if you’re not comfortable with feminism, 80s fashion, diversity, or lesbian sex, you might want to avoid this. If those things are your things? Don’t hesitate! Pick up Girl Reporter now! 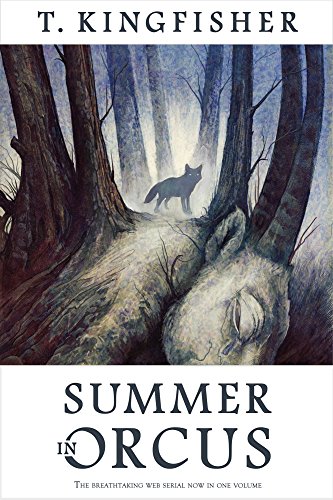 [For an audio version of this article, please listen to Episode 14 of Recently Read on The Incomparable podcast network.]

Once upon a time there was a girl named Summer, whose mother loved her very very very much.

Her mother loved her so much that she was not allowed to play outside where someone might grab her, nor go away on sleepovers where there might be an accident or suspicious food. She was not allowed to go away to camp, where she might be squashed by a horse or bitten by diseased mosquitoes, and she most certainly was not allowed to go on the Ferris Wheel at the carnival because (her mother said) the people who maintain the machinery are lazy and not very educated and might get drunk and forget to put a bolt back on and the entire thing could come loose at any moment and fall down and kill everyone inside, and they should probably leave the carnival immediately before it happened.

That’s the beginning of Summer in Orcus, by T. Kingfisher and illustrated by Lauren Henderson. T. Kingfisher is the pseudonym of Ursula Vernon, who is an award-winning writer and artist of children’s books and graphic novels. Anything with “T. Kingfisher” on the cover is meant for non-children, as is Summer in Orcus—however, you don’t need to be *too* grown up to appreciate this book. In fact, it was a nominee for The World Science Fiction Society Award for Best Young Adult Book. That’s how I came across it.

If you’re a listener to The Incomparable, you might recall episode 412, in which an intrepid band of book-club adventurers (including yours truly) read most-if-not-all of the 2018 Hugo Award nominees for best novel, as well as a few other nominated works. At that time, I hadn’t completed my reading, and time was getting short, so I came up with a cunning plan for the YA category. I decided to read 33% of each book, and then if there was time before voting ended, I’d loop back and finish as many as I could.

I quite enjoyed the stories published under Ursula Vernon’s name, so I decided to start with Summer in Orcus.

Welp. That was a mistake.

Because I foiled my cunning plan right out of the gate. I swiftly reached 33% of the book, and simply could not bring myself to stop. I whizzed on by 50% and then left 60% in the dust. Eventually I gave in and admitted I was reading this whole thing without stopping for anything less important than sleep, work, or food. (And sometimes not for those.)

And now, to why. This book pushed so many of my buttons I felt like a busy elevator. My literary happy-place is anywhere a youngish girl is whisked away from her normal, mundane world into a land of magic and danger (and possibly talking animals). That’s exactly what happens when 11-year-old Summer has a run-in with Baba Yaga, whose chicken-legged hut has come to roost in a neighbouring yard. The old witch promises Summer her heart’s desire! Then the witch turns Summer out into the land of Orcus, where she must figure out where she is, why she’s there, what she should be doing, whom to trust, how to get home, and what exactly *is* her heart’s desire anyway?

The twist on all this that had me lapping it up is that Summer in Orcus is incredibly self aware. Summer herself is a fan of this genre, and she’s continually comparing her circumstances to those in Narnia or Oz or similar locales. So rather than approaching her plight as a typical “oblivious” character, she tackles things the way we, as savvy readers, would likely do it.

Of course you can’t have an adventure story like this without collecting a menagerie of friends-you-make-along-the-way. In this case that includes a talking weasel, a nattily-dressed bird and his flock of valets, some truly fierce geese, and my favorite—a werehouse. That’s not a typo. It is, indeed, w-e-r-e-house, which is a talking wolf who turns into a lovely cottage at night. (Truly the best kind of companion to have along when adventuring…until the dreaded house-hunters come stalking along, anyway.)

Yes. This book has many puns. If that puts you off, A) I do not understand you, and B) you might want to avoid this one—or just push through because there’s an awful lot more to it than clever puns.

The story is not entirely made up of delight and wonder. There are moments of sadness and darkness, including some references to Summer’s mundanely sad backstory. In fact, Summer’s experience dealing with her mentally ill mother is what honed the very skills she needs to succeed in Orcus. I’ll say no more than that, except to tease the existence of characters like the the Forester, the Warlord, and the Queen-in-Chains.

This book was originally published as a free serial, with chapters released twice weekly, and while I can kinda see that structure, I didn’t know it going in, and I wouldn’t have recognized it except for stumbling across that fact on Goodreads. To me it was an engrossing journey-quest that had me laughing and crying and wanting much, much more. I do hope I’ll get it.

In closing, I’d like to warn you all: Antelope women cannot be trusted.