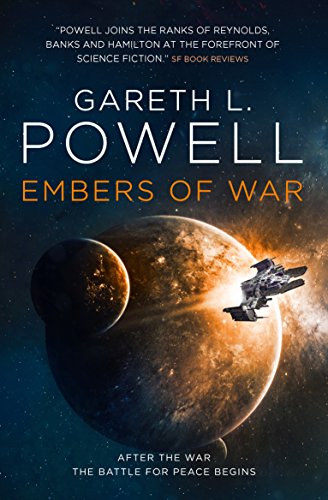 [For an audio version of this article, please listen to Episode 23 of Recently Read on The Incomparable podcast network.]

Another ship dropped off the tactical grid, obliterated by a shower of pin-sized antimatter warheads. In the war room of her Scimitar, the Righteous Fury, Captain Annelida Deal uttered a venomous curse. The Outward ships were putting up more of a fight than she had anticipated, determined to protect their forward command post on the planet below. If she could only get past them, locate the bunker where the conference was taking place, and drop a decent-sized warhead of her own, the war might be over.

That’s the first paragraph of the prologue for Embers of War by Gareth L. Powell. About a month ago, he was giving some pretty excellent Twitter advice on how to promote your novel. In the course of that thread, he wisely put his money where his mouth was and included a short promo for Embers of War:

How can you put the past behind you when you’ve done something unforgivable? Three years ago, the starship Trouble Dog took part in a war crime. Now she’s searching for forgiveness. A nail-biting new space opera series from the BSFA Award-winning author, Gareth L. Powell. pic.twitter.com/Xw3tqV7qgG

After reading that description I promptly bought the book.

That war crime takes place during the prologue. To end the war, one side does something truly horrific—several starships (including the Trouble Dog) take part in the razing of a sentient jungle that spans the entire single super-continent of a planet. Not only does this destroy a billion-year-old biosphere, but it takes thousands of soldiers and civilians with it. As the prologue closes:

The fires burned for six weeks. The war was over in one.

The story proper takes place three years later, and the redemption of the starship that’s mentioned in the tweet-teaser is only part of the book. Each chapter is told from the point of view of a character, and the Trouble Dog is only one of them. She’s a sentient warship who resigned her commission and joined the House of Reclamation—a neutral outfit that comes to the rescue of those in need. We also watch events through the lens of her new captain, Sal Konstanz, former captain of a medical ship that fought on the opposite side of the war. They and the rest of the skeleton crew are sent to investigate the disappearance of a ship in a mysterious planetary system.

Ashton Childe, an intelligence officer assigned to a planet he despises, is also tasked with investigating this event. And on the missing ship is Ona Sudak, a poet with a mysterious past. We get to know each of these characters, and a few more besides, as they all race to reach the site of the incident, or in the poet’s case, to escape the wreckage and explore a truly fascinating and inexplicable planet.

Throughout the action, we get a lot of reflection on the war and the lingering effects of such a devastating conflict. This isn’t a book in which the characters are all battle-hardened veterans who came out the other side tougher than they went in. The effects of trauma are often more subtle than that, and Embers of War does an elegant job of showcasing some of the different ways war can change and shape a person—or a starship.

I admit, that was the part that piqued my interest the most—I love sentient spaceships, and I did find myself wishing for more from the Trouble Dog‘s POV. The humans are all well written and feel like developed characters, but that only serves to set apart the Trouble Dog (and also the ship’s maintenance alien, Nod) even more. Despite the human cells used to grow a ship’s brain, they are most definitely not human, and the POV chapters for the ship and for Nod feel very different from the human stuff. The Trouble Dog‘s interactions with her former pack-mates are fascinating, while the Nod chapters are spare and odd and poetic.

I am a sucker for sci-fi with an ancient intergalactic mystery, and there’s one at the heart of this book. We’re introduced to it fairly early on, though it doesn’t become clear how it affects the story until later in the book, which is as it should be. By the end, I was quite curious what would happen next. Yes, this is definitely the first book in a series, so if that’s not your thing, you should probably steer clear. That said, Embers of War does come to a satisfying conclusion. If I didn’t want to know what came next, I’d feel fine about stopping here. It sort of answers the questions we have only to leave us with more—which is an effective way to close the first novel in a series. The next book, Fleet of Knives, arrived in February, and I, for one, will be checking it out.