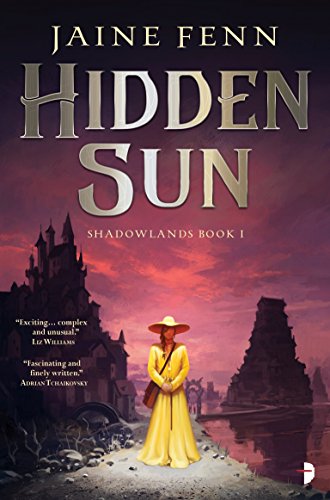 [For an audio version of this article, please listen to Episode 29 of Recently Read on The Incomparable podcast network.]

Rhia looked up, and listened. Distant chanting drifted in through the study window but the house itself was silent. Probably just one of the cats, knocking something over downstairs. She pulled the lamp closer and bent over her workbench again. The second lens was a tight fit but she mustn’t force it. A smear on the inner surface of the glass now would be damned hard to clean off later. Her motions slow and careful, she eased the lens into the cradle of leather straps. The lens dropped into place, and there it was: her sightglass, complete.

That’s the beginning of Hidden Sun, by Jaine Fenn, which I read when Hugo nomination time rolled around earlier this year. After I caught up on my short fiction reading, I decided to dive into some eligible novels, hoping to find something worthy of adding to my ballot, and golly gee whillickers, did I hit the jackpot with this one. I’d read some good books early this year, but this was the first in a while that I couldn’t stop thinking about when I wasn’t reading it. I looked forward to the end of the workday so I could go home and read some more.

A big reason for this is the world-building. Rhia lives in Shen, one of several dozen “shadowlands”, where the shadowkin live and work. Outside the shadowlands, in the dangerously hot-and-bright skyland, only the skykin can survive. These races used to be one-and-the-same, but they split apart during some cataclysmic event thousands of years ago.

So already, I was hooked. I’m always fascinated by mysterious long-ago history, especially when it clearly informs the present. In this case, that’s how this world’s history led to the internal politics of Shen, the external politics between Shen and other shadowlands, and the relations between the shadowkin and skykin. I won’t say too much more about this because I so enjoyed slowly learning about this world. I’d hate to cheat you out of that journey of discovery.

The other big reason I couldn’t put this book down was the plot. A book cannot survive upon world-building alone, and Hidden Sun delivers on both fronts. Rhia is a noble and a mostly-secret scientist in a land where religion tends to reign supreme. As you can see from the opening of the book, she has just invented a basic telescope and is excited to make astronomical observations to add to the knowledge of the network of “natural enquirers”. Before she can even get started, she’s swept up in an adventure—she must travel to another shadowland to search for her missing brother who may or may not have committed a terrible crime before fleeing Shen.

Finding her brother is also important because as the sole heir to her household, if he doesn’t return she might have to get married, produce an heir, and possibly even stop her scientific observances.

Meanwhile, in another part of Shen, Dej, an adolescent skykin, is being raised in what is basically a school/orphanage. All young skykin are raised in shadowland creches until they’re old enough to undergo the mysterious process that allows them to live in the skylands. Dej is a rebel and a thief and thoroughly unapologetic about it. Her adventure starts when she’s sent away to become an adult far sooner than anyone expects, and things don’t go as well as she’d hoped—though maybe they’re not as bad as she feared?

The book mostly alternates chapters between these two characters, which is another part of why I felt mildly addicted to it. Fenn does a marvelous job of leaving you wanting more at the end of a chapter, so you dive right into the next one—at first, you want to get through it so you can find out what happens next to Rhia, only to be swept up in Dej’s story within a few lines. Then lather, rinse, repeat.

There’s also a third POV character—a priest in another shadowland, who is working on some experiments that don’t seem altogether on the up-and-up. They involve dead bodies, so…you know…creepy! He’s a smaller part of the story, but his tale becomes increasingly important as the other two narrative threads weave their way across the world.

I sort of assumed (and hoped) those threads would eventually come together, and I was not disappointed. Especially since the way they came together was A) not what I expected and B) emotionally satisfying.

Speaking of emotionally satisfying, the end of this book is certainly that, but this is the first book in a series so things are not entirely resolved. I pre-ordered Broken Shadow, the next book in the series, as soon as I finished Hidden Sun. Good news for you readers, I procrastinated so long on posting this, Broken Shadow is now available! So go forth and read!