Today kinda sucked, but I still managed to schedule Random Pursuit, work 3 hrs, do yoga, meditate, edit some @TPKill, and cook and eat a dinner of sausages and a salad w/avocado.

Imagine how much I could get done if my brain worked right.

Or maybe I just need to sleep in more.

Today wasn’t great, but it was a day where I managed to overcome my brain (and body) challenges to make some things work for me. That’s not something I achieve every day, so I’m taking a moment to be thankful I was as productive as I was.

In that spirit, I’m closing out the night with a very warm fuzzy thought. I may be asleep by the time Steven gets home from work, but when he does, I’ll be tucked warm and cozy in my blankies, and he’ll settle himself down on the couch and watch the highlights of the hockey games he had to miss because he was working.

It may sound so banal as to make you question why that’s a warm fuzzy, but there’s something comfortably wonderful about the cozy knowledge that we’ll be right where we belong. Especially on bad-brain days, I crave stability and predictability, so here’s to a night like many, many others.

And thank heavens for warm fuzzy thoughts because it’s currently -31°C (-24°F), and poor Steven is walking home! Then my walk to work tomorrow will look like this… brr 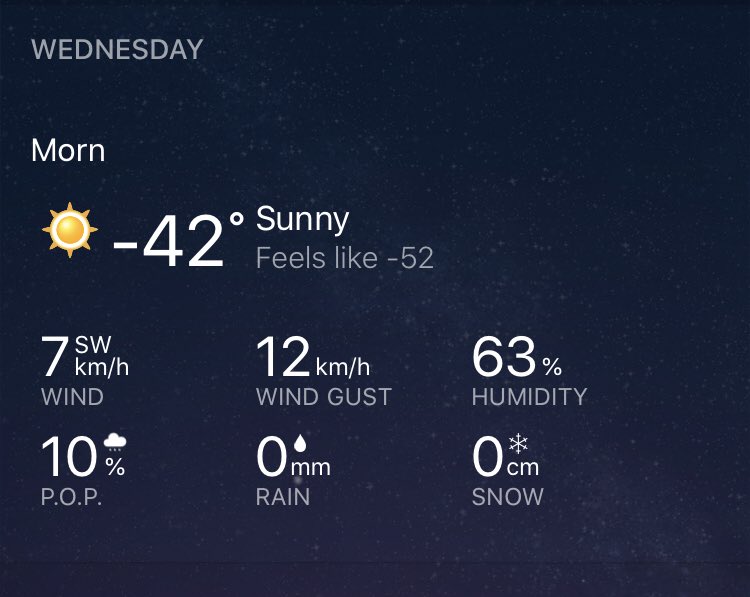 Ok, despite the inspirational title, It’s not that kind of post.

Or, at least, that’s where it started.

I’ve been doing my best to avoid getting sick during flu season for the past few years: getting enough sleep, eating (sorta) well, and most importantly — getting the damn flu shot! And in addition to those basics, the other basic is employing proper hand-washing technique [source: the CDC]:

I can’t tell you how many times I’ve ended up with “Happy Birthday” stuck in my head at work because I’m silently singing it to myself as I lather my hands.

Anyway, yes. I dutifully go through the song twice when washing my hands… except…

Except when there’s someone else in the washroom at the same time. When that happens, I default to my previous hand-washing routine where I just get ’em wet, cover ’em with soap, and rinse ’em off. In and out, lickety split.

Why? Why am I so self-conscious about washing my hands?

Ok, I can tell you why. It’s my dumb social anxiety and my somewhat intense need to not interact with anyone in the washroom. But it’s not so strong it needs to interfere with my Quest for Health. (No shame to anyone for whom this *is* a deal-breaker. Brains gonna brain.)

So this week I resolved to stick to my song and lather lather lather until I can wash those nasty germs away — even if there is someone else there.

And that’s when it hit me: maybe other people are doing the same thing I had been.

I’ve never witnessed anyone at work washing their hands for the proper amount of time. But maybe they’re doing it when I’m not around? Or maybe they’re not, but they know they should be. Either way, acting as an example may trigger my anxiety a bit, but it does that less when I think of it as doing a purposeful demonstration for the good of General Office Health.

I am well aware I over-think things. And there’s every chance no one will even notice except maybe to be like “who’s that weird chick who washes her hands for so long?” But whatever. If I can inspire even one person to wash their hands longer just one time, it could be the time that person would’ve come down with something righteously nasty, and I saved them by also saving myself.

Apparently this week is a series about my new self care routine and how I’m handling it. Neat!

I grew up doing Transcendental Meditation (TM) with my family, so that’s always been what “meditation” means to me. I knew other types of meditation existed, I just didn’t bother trying any of them for most of my life.

Then I attended a conference that covered entheogens, how brains work, and the nature of reality. The day of programming ended with a guided group meditation. That 10-minute experience was more profound and relaxing than almost any of my 20-minute TM sessions. (This may have had something to do with the shared nature of the experience — I recognize that.)

Ever since then I’ve wanted to explore other meditation options (especially since I haven’t found a ton of benefit from my TM practice over the last several years). I did try a “beginning meditation” course, but I bounced off the instructor so that wasn’t helpful. My brother gifted me a book that’s a guide to many different types of meditation, but I found I can’t really get into meditation via reading — it just doesn’t work for me. I know there are phone apps for guided meditation, but having to fiddle with my phone doesn’t appeal to me in terms of getting in the right head-space for meditation.

Then last week while I was lying on the yoga mat getting ready to do my TM practice, I had the bright idea to try asking my Google Home to play “10-minute guided meditation”, and bam! Instant guided meditation. Cool!

That’s when I ran into my next problem: my brain. (Why does it always have to be my brain?)

I’ve been doing TM on and off for over 30 years. Doing something else, especially something that takes less time, felt a little like failure. I know that a) not all types of meditation are right for all people at all times of their life, and b) the frequency of a meditation practice is more important than the duration of the sessions (at least according to that meditation teacher I didn’t like). But tell that to my damn emotions.

I did! I did tell that to my damn emotions.

They didn’t exactly listen. I still get an uncomfortable flutter in my stomach when I even think about doing something different from my decades-long routine, but I truly feel that changing things up will be better for me. I know that right now I’ll get more out of something different and a little more structured.

I will probably keep doing TM several times a week, but (especially in the morning when time is more precious) I’ve insisted to myself it’s ok to do something different and shorter. The ability to do this feels very akin to my triumph at learning to stop doing yoga when it hurts.

As I’ve said before, I’m not really into new year’s resolutions, so the fact that all this is coming together right at the beginning of 2020 is mostly coincidental. But maybe 2020 will be a year of learning to let go of behaviours that don’t serve me. Who knows?

And heck, if you do have recommendations for meditation apps, let me know in the comments (and let me know *why* you think they’re good). At some point I might be ready/willing to incorporate that extra step in my process. Gasp! Who am I even becoming?

(Someone better. Or at least healthier. That’s who.)

This is a topic I come back to often — and in almost every aspect of my life. While there are some up-sides to being a perfectionist (I usually turn in pretty darn good work!), there are also plenty of down-sides. One of the biggest for me is I let my desire to get-things-just-right and do-them-completely get in the way of doing things at all.

I know I’m far from the first person to experience (or write about) this, so I’m not here to lecture you about it. If you deal with this too (and I know so many people who do!), you already know it. Instead, I’m here to celebrate a small way I’ve managed to let go — in a way I’ve never managed to achieve before.

Yesterday I wrote about how I’ve picked up my yoga and meditation practice again. Exercise of any sort tends to be a place where I get stopped up. When I finally make myself do it, I want to really *do it*. Then I hurt myself because I go too hard too soon. This has happened more times than I can count. (And I would have had to start counting several decades ago.)

This time I decided not to let that happen. Of course, deciding something and actually doing it are two different things — I’d made that same decision before and didn’t stick with it. This time, however, I’ve actually followed through, and I am honestly kinda giddy about it.

I am happy to report that I have cut short or significantly altered my yoga sessions four times. (I’ve only been at it for a little over a week, so this is a significant number.)

I’m not sure I’ve ever bragged about quitting before, but right now I totally am. Every time, I felt a muscle twinge or a nerve being pinched, I slowly came back to centre then called it quits for that session (or rested in child’s pose until the video moved onto something I thought I could handle). Could I have forged ahead and kept going without doing damage? Maybe. (But at least one of those times it was very unlikely.)

But why risk it? Is it worth it to finish that YouTube session with an instructor who doesn’t actually know I exist? My perfectionist brain says YES.

But I’m smarter than my brain.

Suck it brain — I’m taking care of myself.

I don’t really do New Year’s resolutions. It’s nice to think about ways I can make 2020 better than 2019, but I’m more into continuous improvement. Sometimes having an arbitrary day to start something new helps (I prefer to start new routines on Mondays as opposed to mid-week), but I used to fall into the procrastination trap all too easily. “I don’t want to start X right now because I have That Thing next weekend. I should wait until after.” “[Arbitrary date] would be a good time to start X because it’s a holiday.” Lather, rinse, repeat.

That’s why I didn’t wait until the new year to start getting back to my yoga and meditation practice. I’d let it fall off quite a bit over the latter months of last year. During my holiday break, I decided I was sick of feeling tired and creaky so often, so I started near-daily practice of both yoga and meditation again — before the calendar clicked over to 2020. (It was only a few days before Jan 1, but it’s the principle that counts — I didn’t let the calendar dictate when I’d start my self care.)

It’s only been about a week, but I’ve already noticed a difference. Even before I re-started the regular yoga, I’d been doing a basic toe-touch stretch a few times a day in which I’d breathe deeply, hold it briefly, then let it all out slowly. Every time I did that, my spine would crackle like a bowl of breakfast cereal. I’d keep breathing and stretching until the crackling stopped.

Now, roughly a week later, when I do that stretch, almost no popping to speak of! It’s a little thing, but it’s really neat to get a measurable result so quickly.

I wouldn’t necessarily know I had made that progress if I hadn’t already been doing that one stretch. So I’m going to keep this in mind as I move forward with this (and any other) self-improvement effort. Stuff is happening. As long as I’m putting in the work, things are getting better. I might not always be able to see or feel it, but it’s occurring just the same.