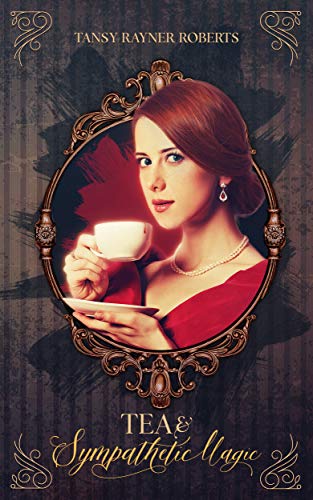 [For an audio version of this article, please listen to Episode 60 of Recently Read on The Incomparable podcast network.]

If anyone had told Miss Mneme Seabourne that she should grow up to be the sort of person who was bored of garden parties, she would have declared then and there that growing up was off the table.

That’s the first sentence of Tea and Sympathetic Magic by Tansy Rayner Roberts. I’m Erika Ensign, and this is Recently Read.

After a rough week (let’s face it, a rough year) and after reading some dark and tragic books, I decided to treat myself to one of my friend Tansy’s novellas. Tea and Sympathetic Magic did not disappoint. It was an hour of my time well spent that cheered me greatly at a time I really needed it.

And if you happen to be listening to this podcast before June 20, 2021, check out the show notes for a link to where you can get this story for free from bookfunnel. (No, that’s not how I got it — I’m a subscriber to Tansy’s Patreon, so I got it via my patronage there, and I just happened to read it right before it became available for free. Lucky for you! Unless you’re listening in the future, in which case, I hope it’s nice there.)

Anyway, regency-plus-magic isn’t a genre I’ve really dived into before, and I guess I still haven’t because this isn’t technically a Regency setting. I’m pretty sure “The Teacup Isles” don’t exist, nor does the kind of magic that will allow you to enchant a whole wedding full of guests using spells cast on desserts, but this setting feels very Regency.

Miss Seabourne is forced to attend yet another garden party where her marriage-pushy mother hopes she’ll snag the eye of the Duke, but she wants nothing more than to retire to the library with a cup of tea and a good book.

The fellow who does catch her eye is the Duke’s “spellcracker” — the person hired to find and dispel any love charms or potions the marriageable ladies may have brought to the gathering. It’s very important, after all, for the Duke to choose his own wife.

If that little bit of information doesn’t hook you, then this story won’t be your bag. If it’s intriguing, I highly suggest you brew your own cup of tea and settle in with this delightful book. By the end, you may want to skip the accompanying pastries though.