[For an audio version of this article, please listen to Episode 55 of Recently Read on The Incomparable podcast network.]

I killed my first man today…

That’s the first sentence of Guns of the Dawn by Adrian Tchaikovsky.

If I had read a description of Guns of the Dawn, I probably wouldn’t have read the book. So I’m pretty glad I never bothered to do that. It came highly recommended by some friends, so I bought it and dug in without seeing anything more than the cover.

This is a book about war. Not my favourite topic. It also has a very regency novel vibe to it — another thing that doesn’t tend to strike my fancy. If those things are up your alley, I urge you to run, do not walk, and nab this book because you’ll probably like it even more than I did.

It follows Emily Marshwic during and before she is drafted and sent to the awful, swampy front lines of a war between her country, Lascanne, and its neighbour, Denland. Lascanne has run out of men to send, and while it is quite unthinkable, the king has begun drafting women to be soldiers.

As I mentioned, this novel, while in a fantasy country where the king can anoint warlocks to shoot fire from their hands in service of their nation, feels very much like a regency novel. The trappings of society are of great importance to Emily and her sisters. They live in a large house on an estate. The Marshwic name is noble and well-respected, for all that the family has fallen in stature after the suicide of Emily’s father — a fate he was driven to by the deplorable Mr. Northway, who became the mayor-governor when it should have been Emily’s father. Skirmishes of words with Mr. Northway are the only battles Emily is familiar with before she “takes the red” and becomes an ensign in the King’s army.

The book chronicles her life both at home and on the front lines, by starting each chapter with Emily’s letters from the front. The rest of most chapters take us through her life, starting well before the draft, covering her training, and then we watch her grapple with what it means to be a soldier, a woman soldier, and a woman.

While this book’s topics may not be my usual fare, I’m very glad I read it. This is most definitely a book about war, but it in no way glorifies war. It examines war through a variety of lenses and comes to very reasonable and realistic conclusions about it. The characters are well-drawn and likeable. And most importantly, Emily’s inner life and struggles are compelling and relatable.

If any of these elements sounds like your thing, I will again exhort you check it out because I expect you’ll be glad you did. 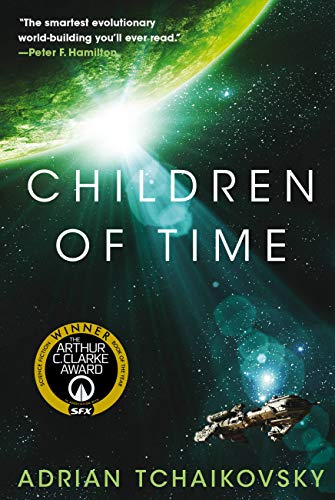 [For an audio version of this article, please listen to Episode 26 of Recently Read on The Incomparable podcast network.]

Just a Barrel of Monkeys: There were no windows in the Brin 2 facility–rotation meant that “outside” was always “down,” underfoot, out of mind. The wall screens told a pleasant fiction, a composite view of the world below that ignored their constant spin, showing off the planet as hanging stationary-still off in space: the green marble to match the blue marble of home, twenty light years away.

But so are humans. The first section of the book takes place in the far future—humans have colonized many parts of the solar system and are terraforming planets in other star systems. Dr. Avrana Kern is going beyond mere terraforming, however. She’s developed a virus that will hasten the evolution and technological development of the monkeys that will be let loose on this newly-terraformed world.

Of course things don’t go to plan, and the monkeys die. But the virus remains.

Cut to many thousands of years later. Earth’s great empire has fallen and risen again, only to witness the end of Earth’s viability as a home for humans. Some of the last vestiges of the species have set off in suspension chambers on a ship called the Gilgamesh to search for a new home for humanity. They are two thousand years from home when we meet them. From there, the book tells the parallel stories of what happens on Avrana Kern’s planet and what happens to the remnants of humanity on the Gilgamesh.

I appreciate how these two stories play against each other. Because of the length of time it takes the humans to get anywhere, and because they have suspension chamber technology, we get to see an entire society develop on the planet while the same human characters continue toddling around the galaxy. If it was just one or the other, it wouldn’t have worked as well for me. I’m intellectually fascinated by stories about the genesis of a society, but they often lack an emotional core because the characters are always changing. On the other hand, a tense story about the possible end of humanity itself might’ve been too grim. As it is, the excitement and hope of a developing society balance the stress of the humans’ tale, while the human characters give me personalities to latch onto while the planet continues to develop.

And what about that society on the planet? Did you guess? Oh yeeeeah, in the absence of monkeys, the virus latches onto other creatures in the planet’s ecosystem—the insects and arachnids, even some of the sea creatures. I learned more about spider anatomy and spider behaviour and how spiders interact with non-spiders than I ever thought I would. Before I read this book I might have said it was more than I wanted to know, but it was just so darn interesting that after I finished the book I felt intellectually sated in a way that rarely happens after reading fiction.

One of my common complaints about fiction is when a writer has done a lot of homework, there’s a desire to shove *all* that information into their text. And while Children of Time skirts that line at moments, for the most part, the facts and info are used to great effect. Tchaikovsky clearly did a crap-ton of research, but rather than flinging factoids willy-nilly, he uses that information to make an educated prediction about how an evolved spider society might function. It feels like it has a firm basis in reality and logic, and the result is a book that continually surprised me—but each of those surprises came with a feeling of “Oh! Of course!”

Of course they wouldn’t build structures out of stone and wood.

Of course their cities would eventually become technologically advanced metropolises made of webbing that spans dozens of square miles of forest.

Of course their technology wouldn’t develop along the same lines as ours.

And as for religion, it’s built into their society in a way I found incredibly satisfying. I don’t want to say too much about that, but I will say watching the spiders’ religion develop was one of my favourite parts of the book.

I’m not gonna lie: reading the bits about the humans kinda depressed me. Not because those bits aren’t well written, but more because they *are*. Don’t get me wrong; I like stories about humans living on spaceships and fighting for survival, and this is an excellent example of that. I just wasn’t in the right headspace for it, perhaps because the real world is a bit of a trashfire. As I said earlier, I was glad to have the future-looking optimism of the spider society to balance this out. If you’re at a mental place where thinking about the end of civilization is totally gonna bum you out, or where thinking hard about the nature of mankind and all its failings is gonna make you sad, you might wanna keep this one on your To-Be-Read pile for a little while. That said, I *do* recommend putting this in your TBR pile if you like sweeping, epic-scale space stories.

And once again, this is the first book in a series. It looks like the second book, Children of Ruin, will be out in May. And hey! It’s almost May!