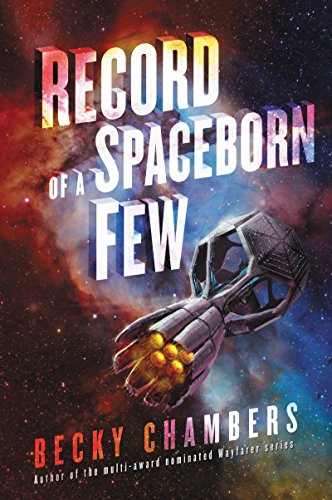 [For an audio version of this article, please listen to Episode 22 of Recently Read on The Incomparable podcast network.]

That’s the first sentence of Record of a Spaceborn Few by Becky Chambers. If you regularly listen to Book Club episodes of The Incomparable, you’ve probably heard Jason Snell and several other people (including me!) waxing poetic about how much we enjoyed Becky Chambers’ The Long Way to a Small, Angry Planet and its follow-up, A Closed and Common Orbit. Record of a Spaceborn Few is her third book in this universe, but I’m not going to call it the third in a series. All three of these novels take place in the far future, in a universe where Earth has been ravaged by the depredations of humanity, and humans have fled the planet — either to elsewhere in Earth’s solar system (Mars or other colonies) or in a great exodus fleet to the stars — where humans discovered they share the galaxy with various alien races, many of whom are part of the Galactic Commons — a loose federation of races that, at the time of these books, had only recently let humanity join.

I’m purposely going to avoid heavy spoilers about the other two books because I think they’re great, and I think you should read them. I don’t, however, think you need to read them before you read this book. (If, like me, you’re Quite Particular about consuming media in the order it was created, you probably will, but you don’t *have* to.)

One of the things I found most fascinating about this world in the first book was the place of humans in this future. We’re basically at the bottom of the social ladder. As I said, humanity was only allowed into the Galactic Commons a short time before the events in these books — within the lifetimes of some of the human characters. I grew up reading a lot of whiz-bang space-future books where Man was either alone in the universe, at war with an equally-powerful race, or simply at the top of the heap. The idea of humanity brought low isn’t a new idea, but it felt refreshing to me, in part because Chambers didn’t dwell on it. It’s simply a fact of life.

The second book focuses on an Artificial Intelligence learning to live disguised as a human. It’s a more personal story, so while galactic politics definitely figure in, that aspect floats much more around the edges. And while I didn’t miss it at all (I really REALLY adored that book), I was excited to discover that Record of a Spaceborn Few is all about humans and human history and the future of humanity. Humans, humans, humans.

It did have the side-effect of feeling a little preachy, but that’s something you run into in most media focused on our place in a larger universe. In Doctor Who we get the 4th Doctor’s famous “humans are indomitable” speech. In Babylon 5, the other races observe that humans build community like no others. In Star Trek…well, Star Trek (especially early Star Trek) is told from a very human-centric viewpoint. So you probably get my meaning. The greatness-of-humanity tends to be a theme I bounce off, which is part of why I loved Chambers’ first book so much. We were just another race in a great big universe. Which is why, as a reader, I’m glad I read this book third. My appetite for information was whetted by the first two novles, so by the time I got to this one, I was ready to dive into human society and see what it’s all about.

This book takes place in the Exodan Fleet and follows the lives of a handful of separate characters as they go about their lives. There is a familial connection to one of the characters from the first book. One of the characters we follow in the fleet is the sister of the captain from the first book, but it’s not in any way a plot point. It’s just a thing that’s mentioned a few times — usually as an example of how and why a human might want to leave the fleet and join the larger universe.

In terms of plot, this book is somewhat similar to the first, in that there’s not exactly a central story or mystery to solve. It’s more a day-in-the-life (or, a-few-months-in-the-life) examination of what it’s like to grow up in a wholly artificial environment where resources are finite. Every molecule must be cared for, tracked, and re-used — up to and including human bodies when they die. Or, in the case of one of the POV characters, it’s about what it’s like to come from living on a planet and then try to adjust to life on a spaceship in a fleet that’s developed a pretty insular society. It’s not so easy to settle in and make friends when everyone looks at you as an outsider. This is nicely contrasted by one character who can’t wait to leave the fleet and go anywhere else because the fleet never changes much, so their life is boring with a capital BORE.

My favorite thing about all three of these books is the well-developed universe Chambers created. It feels so deeply built-out. Like I could pop in and ask about any random race or planet or space station or racial tradition or social construct, and there would be a fully-formed answer. Even the smallest interactions seem to have accounted for how each part of this world affects the others. This book is no different. From the way humans care for their dead, to the layout of the residential areas of the ships, to the way families decorate their homes to commemorate the generations who have lived there, to the central idea that everyone must do something to pull their weight (with the delightful concept that everyone should try different jobs to determine what they’re good at and how they can best serve the fleet), there were exceedingly few moments where I wondered “how would that work?” because Chambers told or showed me how.

In terms of the relationships and personal journeys of the characters, I think I connected with this book the least of the three — possibly because the connections between the characters even within the book are more tenuous than in the previous novels. Instead of having a core cast of characters who work together, we dip in and out of the lives of people who don’t interact with each other much. Though to be fair, when they do, it’s in a meaningful way. I just prefer stories about a team pulling together because I find that more emotionally compelling — it’s like one large pull at my heart-strings instead of having my feels tugged in multiple directions. But that’s just me. Your mileage (light-yearage?) may vary.