[For an audio version of this article, please listen to Episode 34 of Recently Read on The Incomparable podcast network.]

“Are you sure this thing is magical?” Dave slowly turned the Crown of the North under the bright basement lights. The seven diamonds adorning the simple silver circlet barely flickered. “It doesn’t look it.”

That’s the first paragraph of Spirits, Spells, and Snark by Kelly McCullough. Last week I wrote about Magic, Madness, and Mischief, and how much I loved that book. I feel like I can keep this post short because Spirits, Spells, and Snark, the sequel, does everything the first book did, but continues to deepen and develop the characters and relationships, while widening the breadth of what we learn about magic and how it works.

We even get a few new characters with solid page time. The three that stood out to me were all women or girls—well, mostly—one of them is also *something else*, but I won’t spoil that. (It was a little thing I loved that provided some nice perspective on what it’s like to be a high school girl.)

Hi, if you have a kid in your orbit who might need a fun book about magic & myth & dealing with a parent with severe mental illness, you might try my duology which starts with Magic, Madness, and Mischief. I tried to write the book I needed when I was 10 https://t.co/Gk2ge29keV

I heartily endorse this sentiment. My struggle as a child was more with my own mental health than with that of my parents, but I still think these books would’ve provided me with comfort, support, and an acknowledgement of craptastic brain chemistry that I didn’t come to until much later in life.

As I said last week, these books take mental illness seriously and they treat it in a way that manages to be sensitive with a healthy dollop of pathos—while also treating it as something that can be dealt with and lived with and managed if you are careful and thoughtful and get the right help. Crucially, mental illness is not something you can just “magic away”. I felt like Spirits, Spells, and Snark tackled this even more directly than the first book did (due, in part, to the way the plot progresses from the first and into the second book), and this was all to the good.

I have so many more things that I love about this book—how best-friend-Dave deals with the world of magic, how Sparks the fire-hare-familiar deals with being bound to a tween boy, and how that tween boy, Kalvan, learns to navigate both the world of magic and the “real one”. But suffice it to say, if you read the first book and liked it, you’ll definitely want to continue with Spirits, Spells, and Snark. 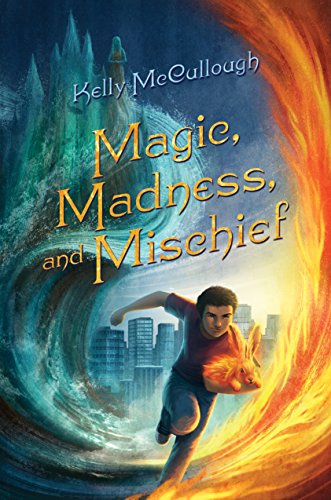 [For an audio version of this article, please listen to Episode 30 of Recently Read on The Incomparable podcast network.]

Fire ran through all my dreams and I ran after it, the blackened ground crackling beneath my feet.

That’s the first sentence of Magic, Madness, and Mischief, by Kelly McCullough. Before I get into the book, let’s do the obligatory full disclosure: I had the pleasure of meeting Kelly a few years ago at a convention, and he is a truly lovely person with adorable cats and a great twitter feed, and I very much look forward to the next time I see him. However, I suspect all of that has very little to do with how much I enjoyed this middle-grade fantasy.

Wait! Before you tune out at the phrase “middle-grade”, let me assure you this is the kind of middle-grade book that is also appealing to many fantasy-loving adults like myself. I’ve certainly read some middle-grade fiction where the writing was so simplified and the plot was so dumbed-down that I didn’t enjoy the experience at all. This is not that.

On the contrary, I zipped through this book—twice, in fact—without wanting to put it down. The prose is simple enough to be accessible to a young audience, but it’s also snappy enough to hold the interest of an adult like me. And, importantly, the story is easy to follow while still being engrossing and tackling some heavy topics.

The term “madness” is placed in the title very deliberately. The main character, 13-year-old Kalvan Munroe, has to deal with the discovery that he’s a “child of fire” and has budding magical powers. But he also has to deal with a mother who suffers from severe mental illness. This topic is one that is close to my heart, and I feel it is handled sensitively and realistically.

This book does *not* do the thing I hate and chalk mental health issues up to magical interference or some nonsense like that. Mental illness is real, it’s serious, and magic can’t just cure it. And on top of dealing with all that, Kalvan still has to do the usual kid things like show up for school, do homework, take tests, hang out with his best friend Dave, and deal with a stepfather who is taciturn at the best of times and scary at the worst. None of that is easy when you’re trying to learn to control magic flame powers and are never more than 30 feet from a sarcastic, magical fire-hare.

Oh yes, I must mention Sparx, who is now one of my favourite sidekick-companion-familiar-type characters of all time. He is stuck with Kalvan, and Kalvan is stuck with him, and that leads to exactly the kind of delightful antics and banter I hoped for when Kalvan accidentally conjured Sparx. Their relationship deepens throughout the book, and it just gets better and better.

One thing that sets Magic, Madness, and Mischief apart from some of the other middle-grade and young-adult fiction I’ve read is its very distinctive sense of place. It is set in and around a slightly fictionalized version of St. Paul, Minnesota. As a transplanted Midwesterner, I’m always a bit of a sucker for books set in the flyover states, so I’ll admit my bias there. But I haven’t visited the Twin Cities often enough to really know the geography, so it’s not like I was wooed by recognizing a bunch of landmarks—other than the Mississippi River. (I’m familiar with *its* work—or, “her” work, as the case may be.)

McCullough conjures a very grounded setting with enough description to make me feel like I understand what’s happening where, but not so much that I get bored with lengthy explanations. While I’m definitely a fan of fantasy novels set in fantasy realms, there’s a special frisson that comes with magic when it’s overlayed upon a familiar, earthbound environment. And here it’s not a spooky countryside or an intimidating metropolis; it’s a Midwestern city that most people would find pretty ordinary. (Don’t get me wrong, I like St. Paul, but it’s not like it has much of a thrilling reputation far and wide.)

If you’re a regular listener to Recently Read or the book-club episodes of The Incomparable, you may know that I’m a bit of a connoisseur of fictional magic systems. Magic, Madness, and Mischief doesn’t really build out the magic system enough to totally engage that part of my nerd-brain, but I get the feeling this is on purpose. Kalvan is just barely scratching the surface of this new-to-him world of magic, so we as readers are also not fully versed by the end of the book. It’s clear that magic is elemental—fire, earth, water, air—but we don’t get a lot of detail about how each works or how they interact. That said, there are plenty of hints that McCullough knows exactly how this all fits together and that we’ll eventually learn more just as Kalvan does.

And that brings me to the last bit of full disclosure: the reason I’ve read this book twice is because the sequel is already out, and I wanted to dive back into this magical version of St. Paul to re-live the magic of this book before starting the next. I’ve already burned my way through Spirits, Spells, and Snark (pun intended), and loved every moment of it. Consider that a teaser for next week’s post.