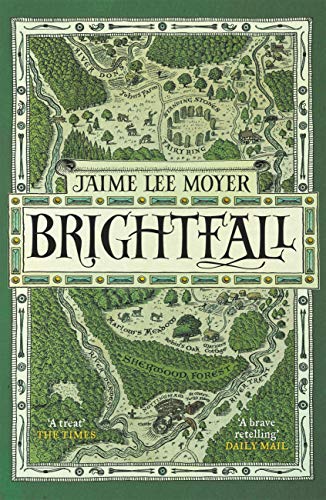 [For an audio version of this article, please listen to Episode 59 of Recently Read on The Incomparable podcast network.]

In the middle of the greenwood stood an oak, broad as it was tall, with roots the Fae believed wrapped around the heart of the world. People on the farms outside Sherwood still told tales abut that tree; most called it Robin’s Oak. Few spinning takes about Robin and Marian’s adventures knew I shared a cottage there with my children. Much as it pained Robin to claim Kate and Robbie, they were his children too. Only a few close friends and the monks in St Mary’s knew he’d left us on our own almost twelve years ago.

That’s the first paragraph of Brightfall by Jaime Lee Moyer. I’m Erika Ensign, and this is Recently Read.

Having loved Jaime Lee Moyer’s Delia Martin series, which starts with Delia’s Shadow, I was excited to pick up this new novel, even though it’s not remotely related to the events in that series.

This book is a poignant take on the aftermath of the Robin Hood myth, told from Marian’s point of view. It’s roughly 18 years since the events popularized in story and song, and, as you may have gathered from the first paragraph, it’s been 12 years since Robin left Marian and their two unborn children, had the marriage annulled, and retired to Friar Tuck’s abbey.

Yeah. Bit of a twist right off the bat there.

Also, Marian is a witch. She knows magic, can contact the Fae, and even has a Great Dragon for a friend. I love every one of these elements.

The action in the book gets started when Abbot Tuck comes to visit to ask for Marian’s help. Several of their friends of old have died in mysterious circumstances — including, most recently, Will Scarlet, who is Marian’s lover and has raised her children with her for more than a decade.

She’s heartbroken at losing her love and partner, and equally appalled when she learns that Little John’s 11-year old son Ethan is one of the poor souls to die from what Tuck believes must be a curse. And because it’s a curse, Marian is the only one who can figure out who cast it and how to stop them. He begs her to journey to the scenes of the crimes and pull the threads to solve the mystery and — more importantly — stop the killings.

So Marian sets out to try to save the day. Unfortunately, Tuck has set Robin of Sherwood himself the task of protecting her on the journey. Neither of them are pleased about the situation, though they do gain a few colourful, and truly fantastic, companions along the way.

That’s the setup, and I won’t say much more about the plot, but I will leave you with a word of caution. If you’re looking for a swashbuckling Robin Hood story with a lot of lighthearted fun and banter, this is definitely not that. Brightfall is a fairly dark story about wrestling with grief, making tough choices, doing what must be done because nobody else can do it, and coming to terms with loss and change.

And it deals with these things very well. So if you’re in a place for a serious examination of life and loss through the lens of a strong but tired middle-aged woman of power, this is absolutely the story for you.

And, like I said, it’s got faeries and dragons, which for me is always a win.