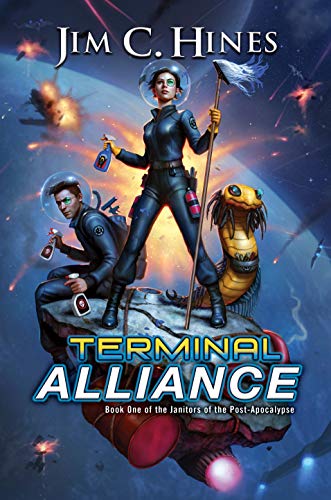 [For an audio version of this article, please listen to Episode 35 of Recently Read on The Incomparable podcast network.]

That’s the first sentence of Terminal Alliance (Book One of the Janitors of the Post-Apocalypse) by Jim C. Hines. I love apocalyptic books. Whether it’s a book about how the apocalypse happened or a post-apocalyptic book in which the characters learn hints about how and why the apocalypse happened in the first place—that’s always been a corner of genre reading that drew me like a moth to a radioactive flame.

Lately, however, with the world feeling like a trashfire that’s not terribly far from any one of several possible apocalypses, I’ve sorta cooled off on reading apocalyptic fiction. I still like the concept, but it makes me sad and scared enough that I just can’t quite do it these days.

Or so I thought.

Enter Terminal Alliance. The only reason I was willing to try a book with “Apocalypse” in the subtitle was because it was written by Jim C. Hines. His Magic Ex Libris series was one of the most entertaining things I’ve read in the last decade so I figured if anyone could make an apocalypse feel humourous and acceptable to me, it would be him.

Folks, I was correct.

I don’t want to scare you away if you’re not a fan of humourous sci-fi, because that’s usually a sub-genre I avoid. Douglas Adams and Terry Pratchett were geniuses at what they did, it just wasn’t for me. Hines’ style walks the line between funny and heartfelt and exciting and quippy so deftly it’s like he wrote this book just for me. If you do happen to be a fan of comedic sci-fi, this will probably work for you. It’s certainly well worth trying.

The Krakau are the race that figured out how to “cure” humanity. Oh yes, there was an apocalypse. It resulted in all humans turning “feral”—becoming mindless creatures that roam Earth trying to kill and eat most anything they come across. Civilization and human thought were a thing of the past until the Krakau started “waking” humans up with their cure.

Recently woken humans choose their own names from a list of historical figures. The original Marion Adamopoulos was the woman who accidentally created the virus that destroyed humanity. Huh.

“Our” Marion Adamopoulos is in charge of a small crew of sanitation experts who are the only humans on their ship to keep their higher brain functions when a bioweapon turns the rest of the ship feral and results in the death of almost all the alien crew members.

This requires some delightful galactic intrigue and politics, a diverse array of differing alien species with individual characteristics and motivations, and some closely guarded conspiracies. There are also great scenes in which the team get into tight spots and get out by using their knowledge of cleaning agents, plumbing, and proper ventilation. This isn’t a story where the cleaning crew suddenly learns how to be heroes in any conventional way. They still aren’t pilots. They still aren’t really fighters. They’re janitors, and they use those skills to get the job done.

Maybe my favourite thing about this book (and that’s saying something!) is that never once is the janitorial profession treated as a joke. There are some characters who certainly look down on it, but the book makes it clear there’s nothing embarrassing about performing a crucial job and doing it damn well. Marion is rightly proud of her skills, her team, and the service they provide.

Terminal Alliance is full of details that build out the world and also make me smile, like the aforementioned tradition that “awakened” humans read their planet’s history and choose their own name from those of historical figures:

For example, we have rough-and-tumble Wolfgang Mozart. She’ll threaten to eat your face as soon as look at you.

The various alien species are well-realized too. This isn’t a universe full of bipedal creatures. Humans are seemingly rare in that respect, and a lot of thought went into what each species would need to survive on a spaceship or space station, given their respective physiological needs.

As is clear from the title and subtitle, this is book one of a series. Terminal Uprising, the sequel, is a fantastic follow-up that answers some questions and takes the characters somewhere they’d’ve never dreamed of going.

If, like me, you’re in need of something that’s rather lighthearted, with a decent amount of laughs and snark, but that also pulls in post-apocalyptic and space-opera sci-fi themes, look no further than Terminal Alliance (Book One of the Janitors of the Post-Apocalypse) by Jim C. Hines.