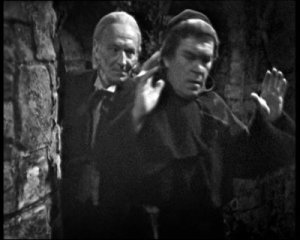 Ahh, Saturday afternoon!  My favorite time of the week.  When I (usually) get to kick around the house, relax, and get a few things done–like some knitting and Doctor Who for example!  I finished up The Time Meddler and started the first really big orange stripe on the scarf.  Add that to the laundry I’m doing, and I’ve got myself a fairly productive day.  Yay me!

Parts 3 and 4 of this episode were good fun.  I’ve quite enjoyed this one overall.  Someone recently pointed out that I’m rather nice about Doctor Who, and I can’t argue with their assessment.  In general I’m pretty much a find-the-good-in-everything kinda gal.  It did make me want to point out that these aren’t really “reviews” exactly.  I’m not aiming to do any critical analysis.  Rather, I’m just spouting off about whatever happens to catch my attention.  Since I’m usually focusing on the positive, that tends to be the good stuff.  And truth be told, I miss quite a lot because when I’m knitting, my attention is divided.  I’m by no means a very accomplished knitter.  I’m not one of those folks who can knock out several dozen rows without looking down at my hands.

Anyway, I continued to enjoy The Time Meddler.  It takes place in Britain just before Harald Hardrada invaded and fought with Harold Godwinson (which was just before Harold Godwinson had to head off to fight the Battle of Hastings with William of Normandy).  I’ve always been fascinated with that era of British history, so that probably colored my view of this story a bit.  Another thing that made this fun was that it was kind of hilarious to see the Doctor dressed up in a monk’s robes.

Easily the most excitement of the whole episode was the cliffhanger between parts 3 and 4, where we discover that the meddling monk has a TARDIS!  We knew he had to be a time traveler, but it didn’t even occur to me that he might be a Time Lord, much less one with a fancy “Mark IV” TARDIS–whatever that means.  The Doctor didn’t answer when Vicki asked what mark the Doctor’s TARDIS is, and I think we’re supposed to assume it’s an earlier version.  However, the Doctor’s is a “type 40,” which is far higher than 4.  Maybe “type” and “mark” are separate categories.

The one thing that bothered me the most about this episode was that the monk kept a checklist for his master plan.  Seriously?  I was more ok with it when I realized he kept it in his TARDIS, but still, sheesh.  Oh well, perhaps I shouldn’t judge.  He’s probably severely OCD and needs the satisfaction of ticking off completed tasks.

As for the knitting, like I mentioned, I’ve just started in on the first large orange stripe.  I’ll probably post another picture when I get that done.  It’s coming along smoothly.  And I’ve gotten to it much more often lately.  I think I have several Doctor Who-themed podcasts to thank for that.  They keep the good Doctor on my mind!